In this photo essay, I have tried to document the stories of some of those who had migrated to big cities in India and got trapped due to a COVID-19 lockdown.

This photo essay tells a COVID-19 story; a story of the anxieties and hardships faced by men who had migrated with their families from remote rural regions of India to Kolkata in order to work as casual construction labourers, street vendors or other similar jobs. It tells a story, in other words, of people who keep India running. Labourers who do everything from constructing buildings to cleaning sewers. They come to cities from rural India in search of work. Every morning they wait at street corners, for contractors who might have a job for them.

The COVID-19 pandemic hit these people especially hard. With factories and other workplaces closed following the lockdown, millions of them had to deal with the loss of income, food shortages and uncertainty about their future. Many of them and their families went hungry. Thousands then began walking back home as initially there was no means of transport due to the lockdown. These long treks home were made in the most inhospitable of conditions, frequently with tragic results.

According to me, heroism does not always mean an act of bravery. Heroism is also staying strong during harsh times. In my eyes, these men are all heroes, who fought hunger and poverty alongside the virus. I had a little chat with 12 of them to know their untold stories. 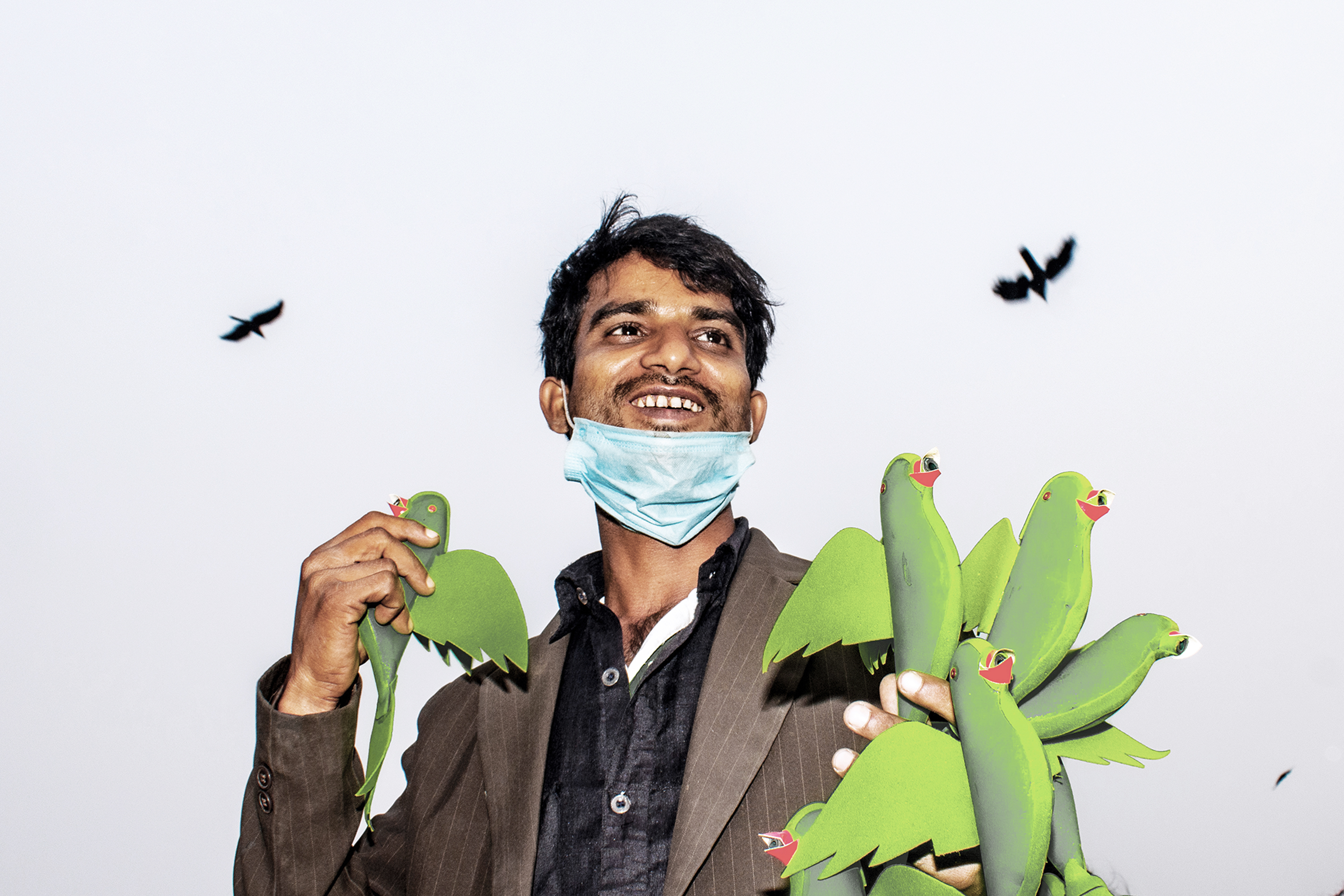 The birdcatcher: Those unable to return to their homes had to resort to other means to eke out a livelihood. With the factories, mills and marketplaces closed, they had to step out of their accommodation, braving the scourge of coronavirus in order to make ends meet. One such individual, who in normal times would enthral kids with his toy parrots, was roaming the empty streets of Kolkata pinning all his hopes on the appeal of his colourful stuffed birds. Possibly nothing could have encompassed the resilience and the hope for a brighter tomorrow better than the vibrant feathers of his stuffed birds and the disarming smile on his face. 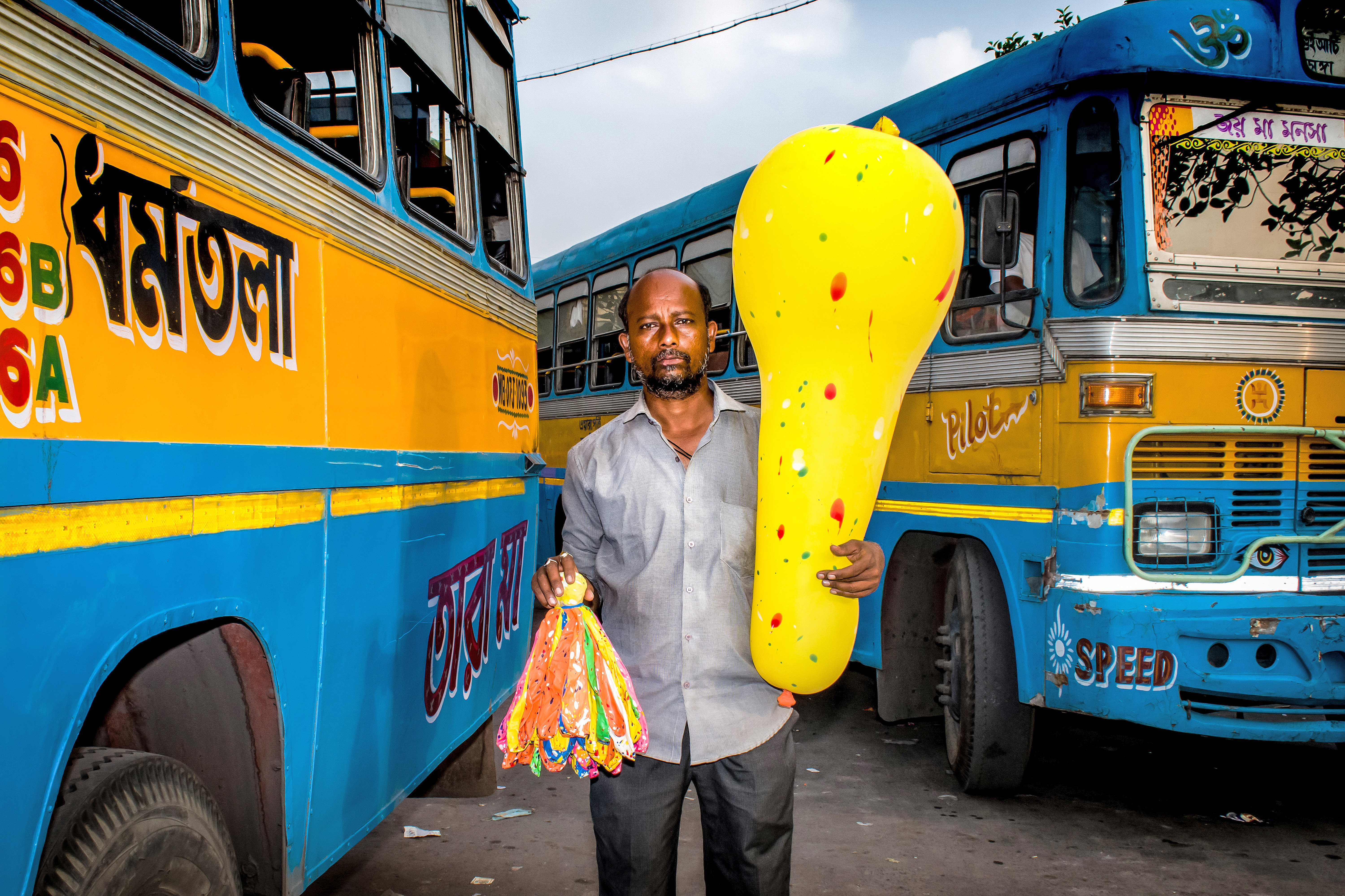 The street vendor: This middle-aged man, who makes a living by selling balloons at one of Kolkata's busiest bus terminuses, fondly recalled how during normal times kids would make a beeline for his balloons and pester their parents to buy them one until they relented. The lockdown had dealt a crippling blow to him and his family with no immediate respite in sight. 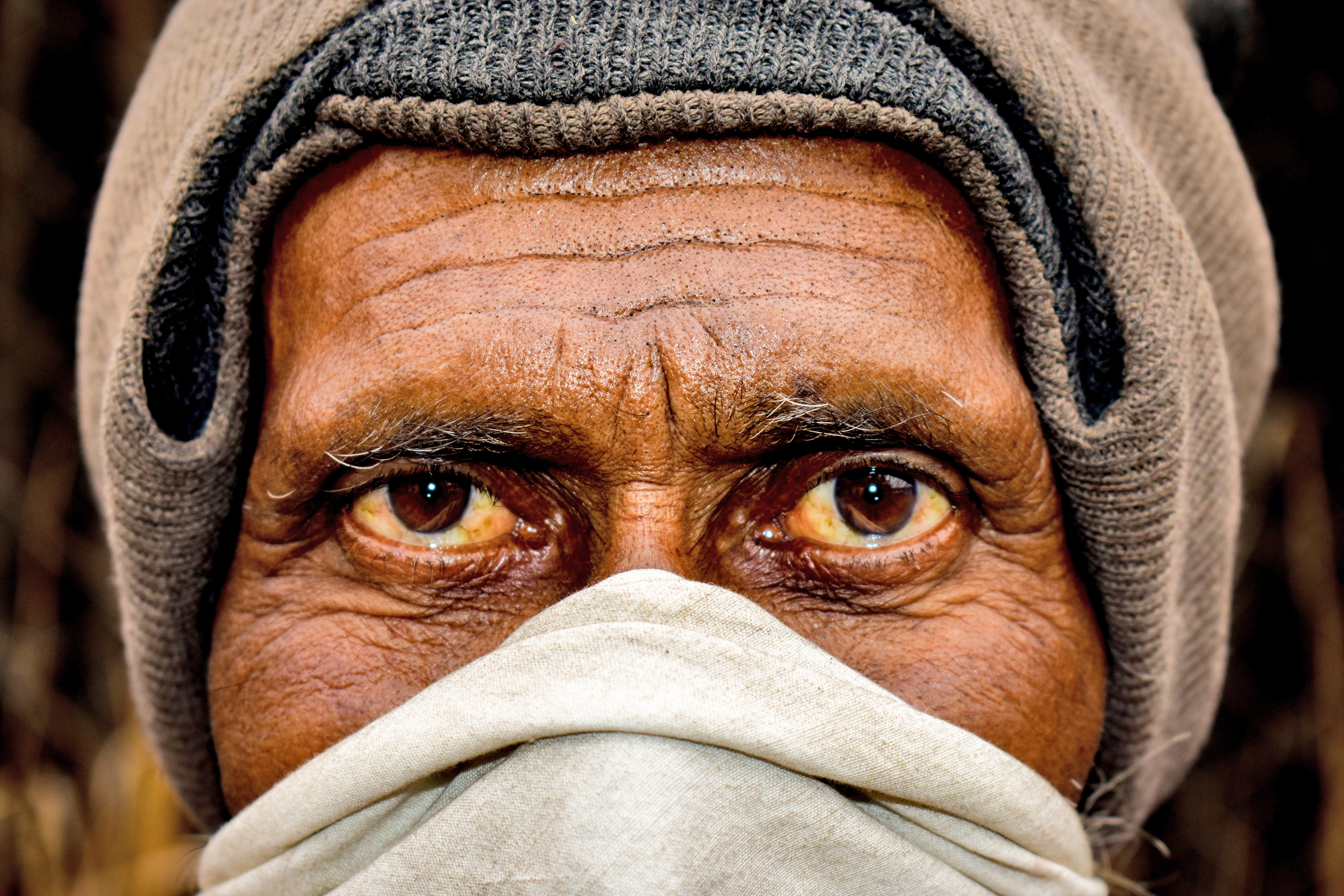 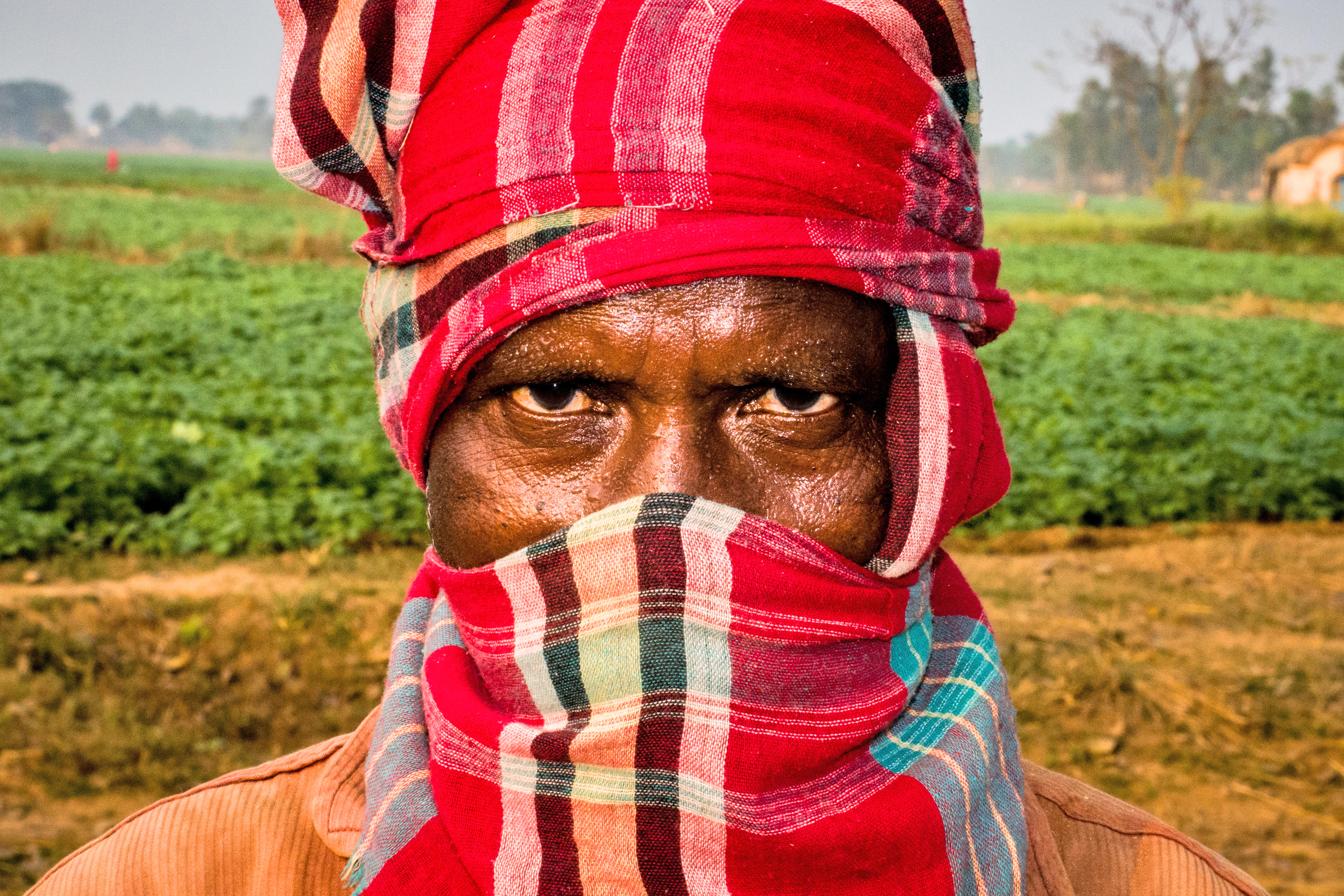 The farm worker: India is home to about 120 million smallholder farmers who contribute over 40 per cent of the country's grain production and over half of its fruit, vegetables, oilseeds and other crops. Due to lockdown, the whole industry suffered a huge setback. This farmer in the outskirts of Kolkata narrated the harrowing experiences which he had to endure during the lockdown. 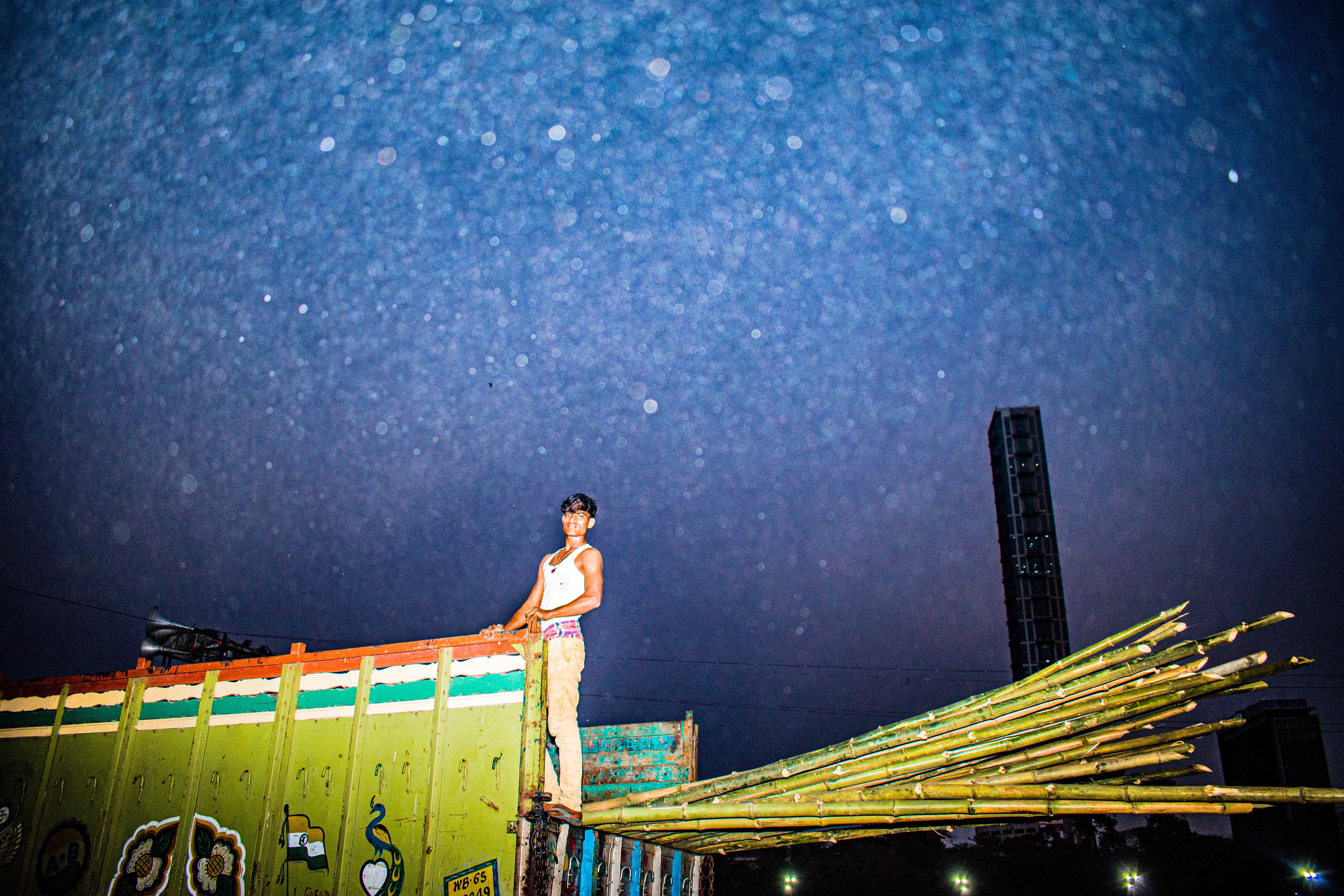 The labourer: This young man, a construction worker, found himself out of work within days of the 2020 lockdown. With no mode of transport available to him, he was forced to remain cooped in dingy accommodation in Kolkata and take up odd jobs to make ends meet. Here he can be seen unloading bamboo poles—a fixture in any election rally in Kolkata. 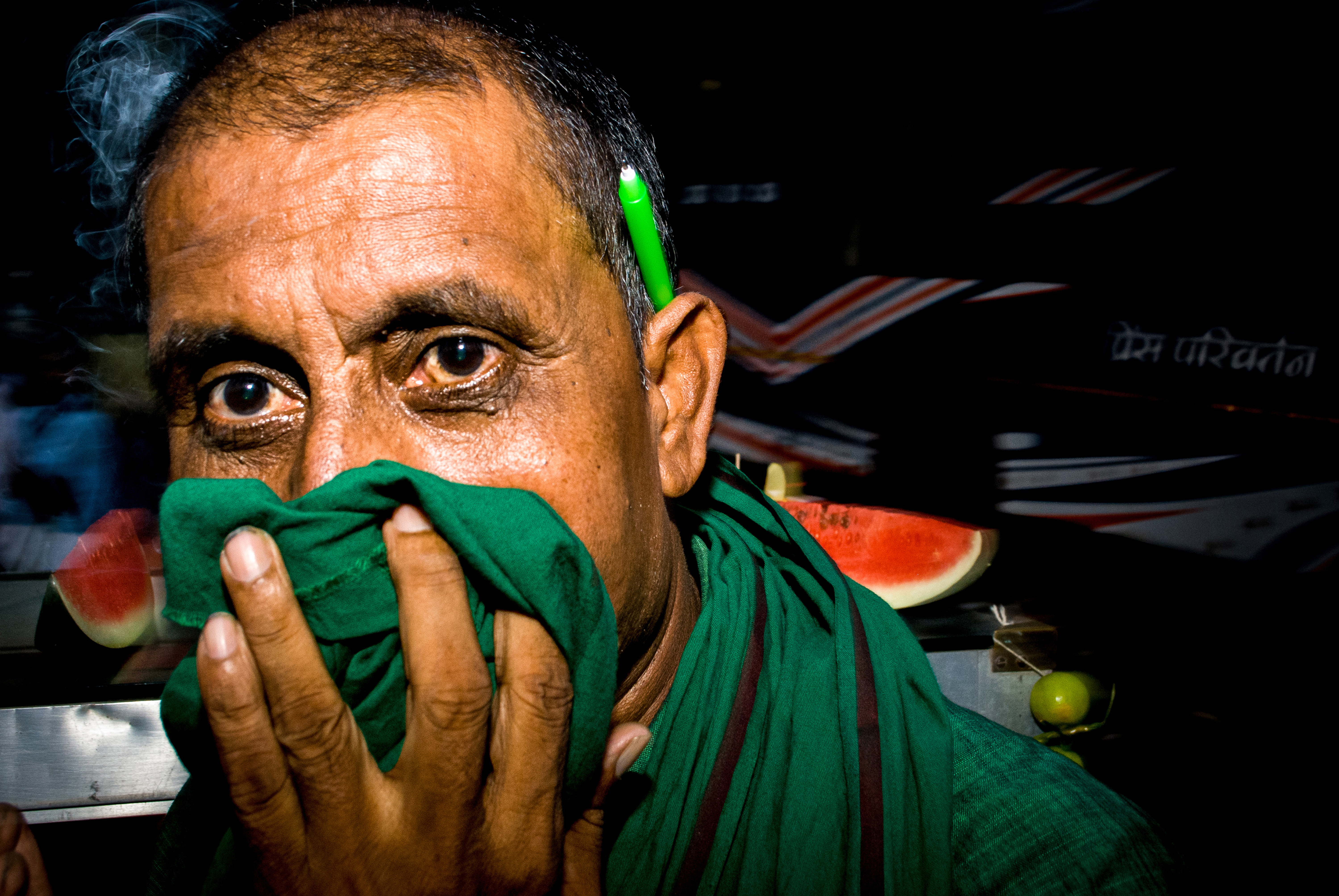 The fruit seller: This migrant worker from a small town in Bihar recalled his horrendous experience during the COVID-19 lockdown in Kolkata, where he had migrated with his family to work as a local fruit seller in a market. He explained his anxieties about returning to his hometown. The shot was taken near the Esplanade bus stand in Kolkata, where hundreds of workers were waiting and trying to get on a bus leaving for Bihar.

The factory worker: A shot of a worker, still working in the factory, after the lockdown had been imposed. I think of a hero as someone who understands the degree of responsibility that comes with freedom, such as a worker working in harsh conditions even during the pandemic, risking his own life for the sake of his responsibilities as a father, a son and a husband. Not all heroes wear capes, and not all heroes get recognised by society. 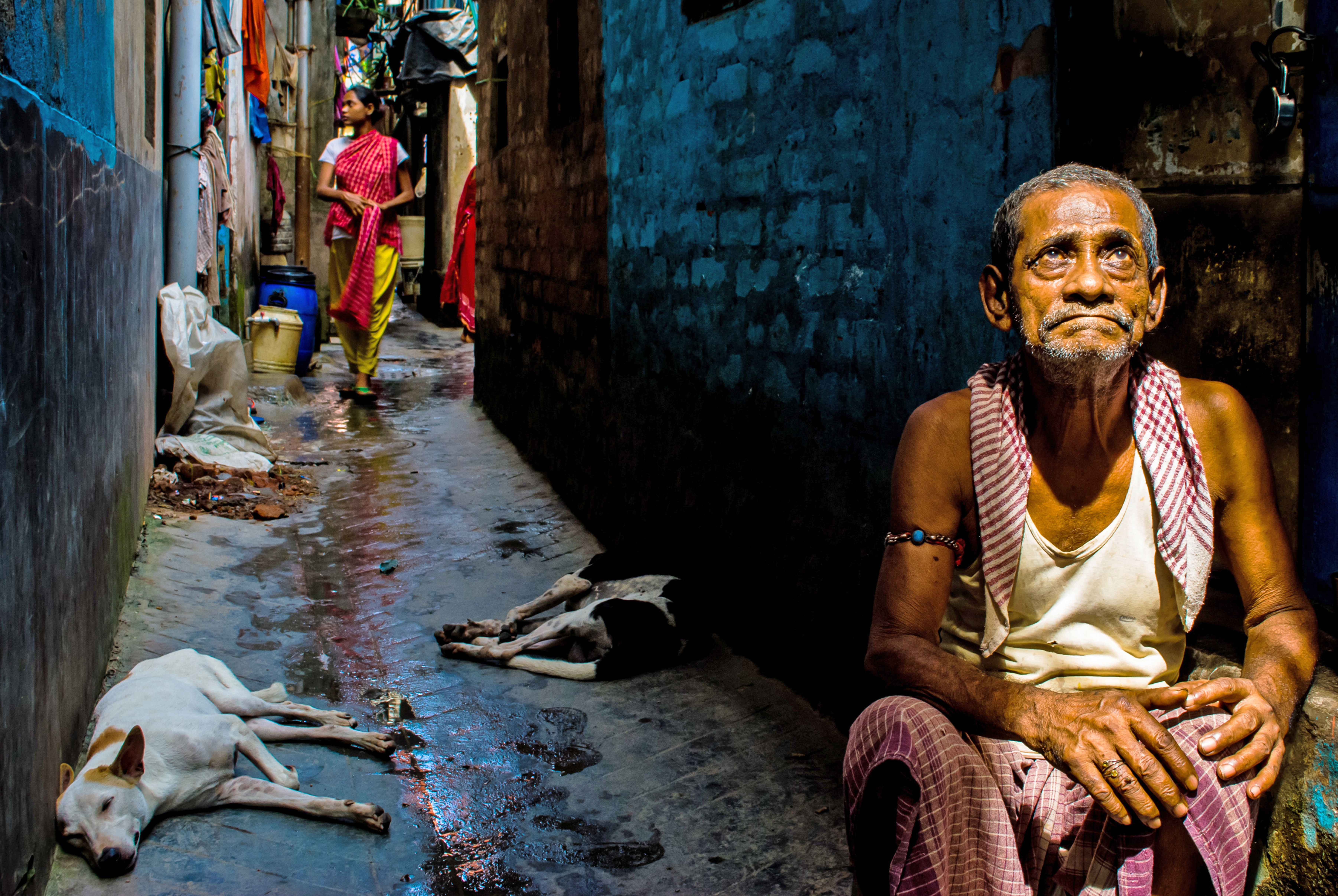 The hope of a father: This man's son was a labourer in Kolkata who had migrated from Bihar with his family and lost his job due to lockdown. He believed that someday their circumstances would improve. They didn't give up and not only survived the virus, but also poverty. For me, this family is an example of heroism and courage and that no situation, however bad, is permanent. During a six-month lockdown, this father couldn't step outside the boundaries of his house, but he remained calm and hoped that one day everything would become normal again. 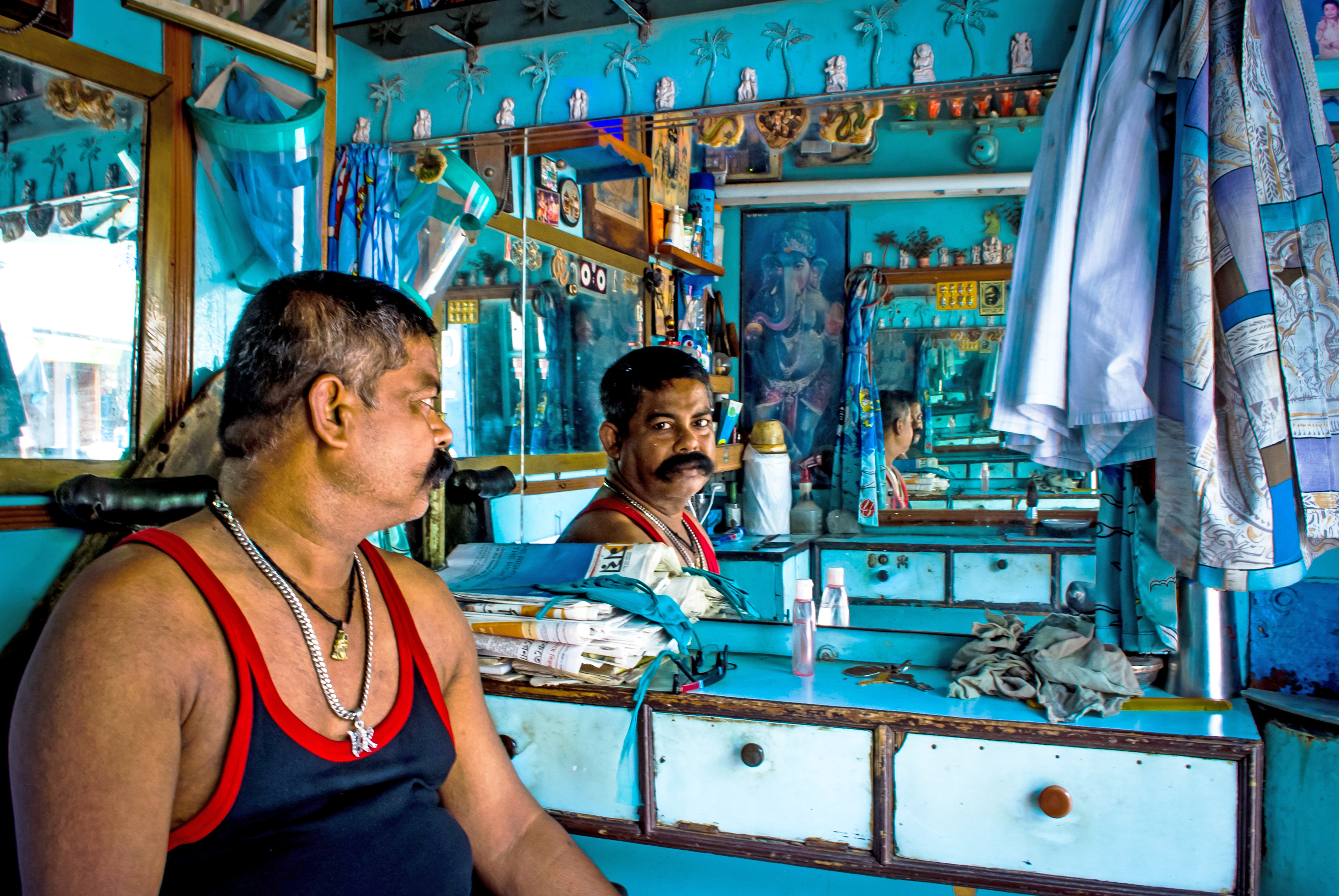 The barber: I was walking through Kolkata and found a small empty old fashioned barber shop. Lockdown was over in India and people had just started coming out of their houses but still maintaining COVID-19 protocols. I had a conversation with the barber and discovered that his business was declining day by day due to lockdown. During the conversation he looked at his mirror. For me, this picture depicts a common man working hard in difficult conditions—running a barbershop, despite difficulties. 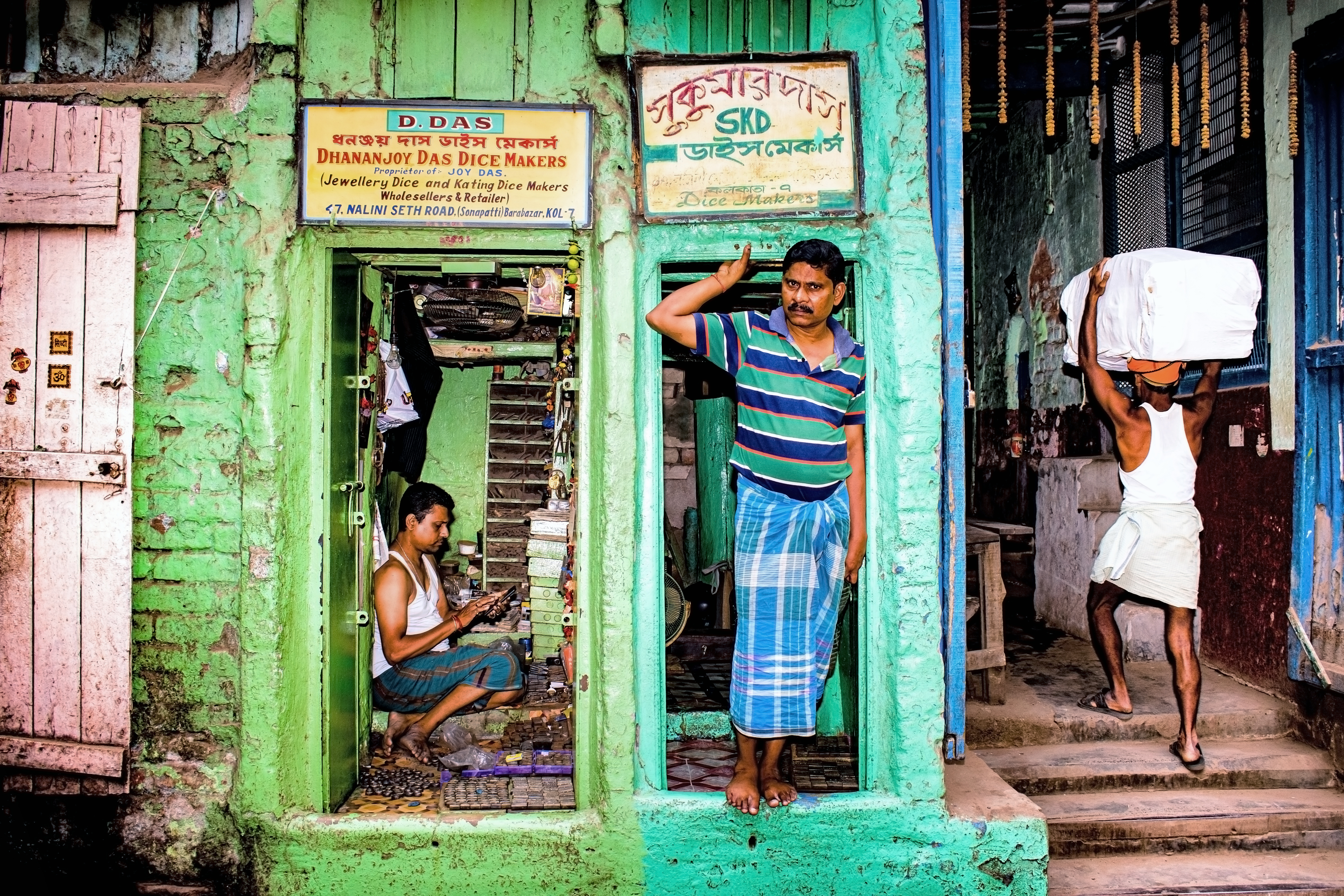 The shopkeeper: A shot of a local non-essential shop that was severely affected by COVID-19. Last year, lockdowns impacted thousands of small-scale businesses. Only pharmacies and grocery shops were allowed to open. Workers in these small non-essential shops were most affected and were given permission to open only for a few hours a day—and then with fewer customers. 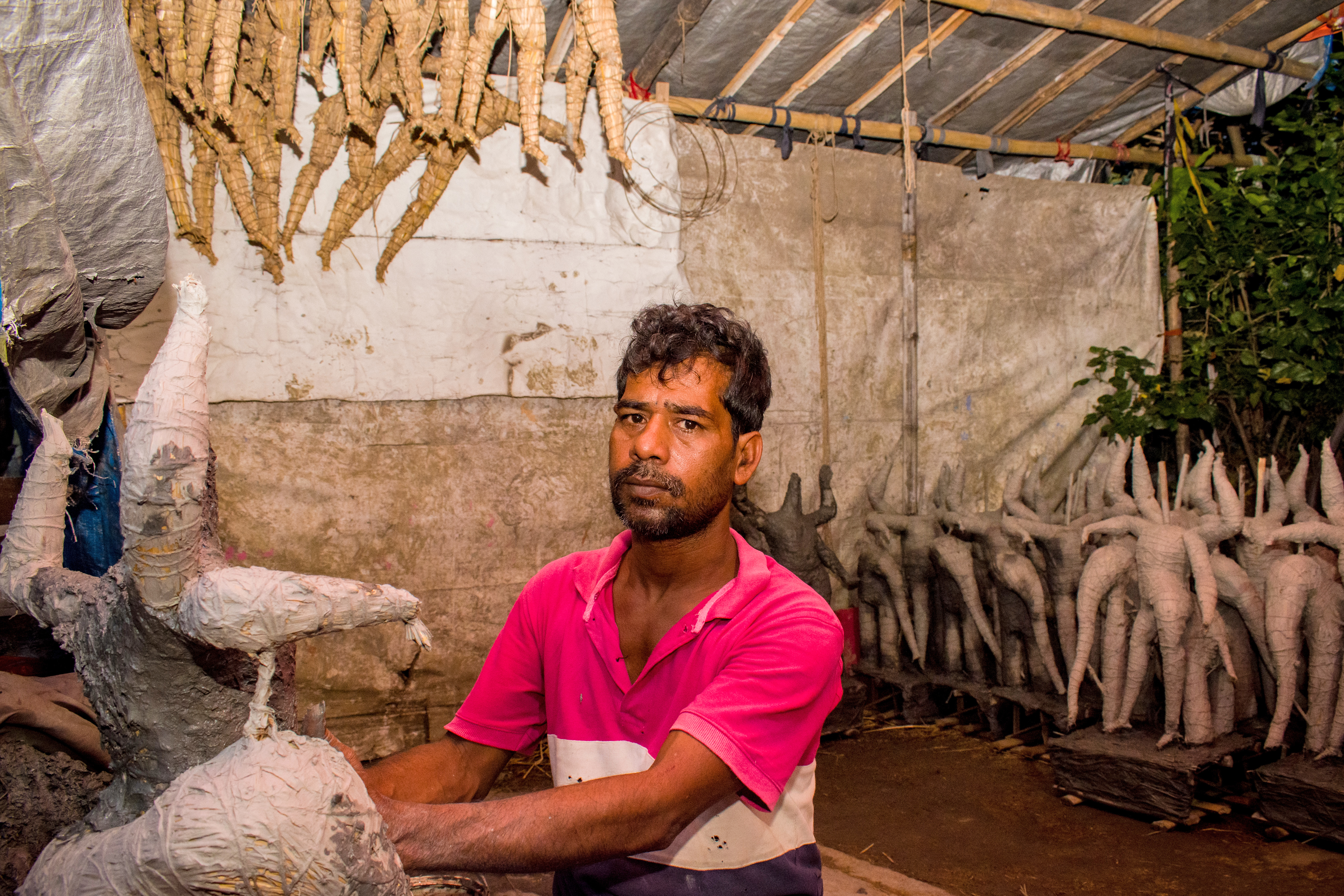 The idol maker: This man moved from Orissa state to Kolkata. Kumartuli is a traditional potters' quarter in northern Kolkata, renowned for manufacturing clay deities. For six months during lockdown, this man didn’t work on a single idol; before he would make 30 idols up to 10 foot high in a season. The cost of raw materials increased during lockdown but customers weren’t buying due to the economic slowdown and restrictions on religious gathering. 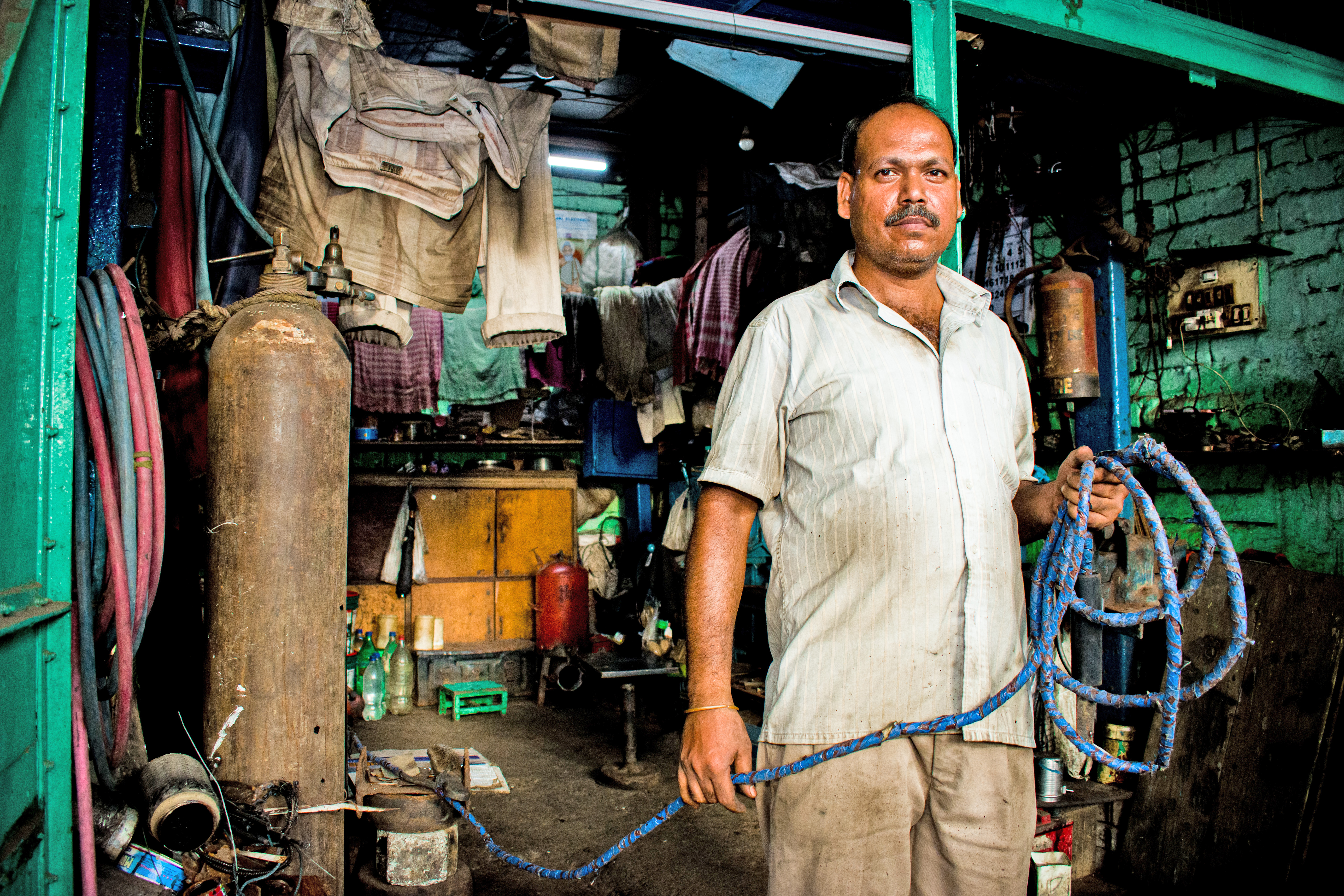 The garage mechanic: A shot of a garage mechanic working during the lockdown in order to earn some money. Since most of the garages were closed, he still tried to open for a short span of time hoping to gain some customers, but there were very few and most of the days there were no customers at all due to the restrictions on private vehicles. He hoped that someday things would become better for him and his business would resume.

These people—I don’t even know all of their names—are a small representation of millions of people like them. They are marginalised and vulnerable people facing extreme adversity; they are people who still didn’t give up, each and every day a struggle and a battle to be fought; they are the people who build the society. For them, fear of contracting COVID-19 was eclipsed by the battle for survival for them and their families.

I believe all those people who have left their hometown and sacrificed their safety and life to work and to take care of their family are heroes. As we know, they are typically unsung heroes. My aim with this photo story has been to put their stories in our hearts and minds. 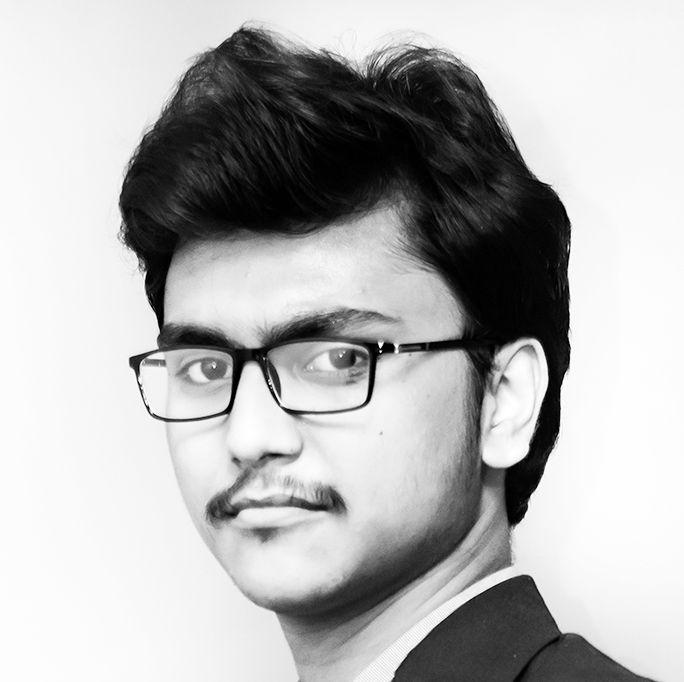 Shubhodeep Roy is a 21-year-old award-winning photographer based in Kolkata, India. He has been working on social responsibility projects and trying to photograph socially-important issues. His work has been exhibited globally and has been published on several occasions nationally and internationally. He is pursuing a Bachelor's Degree from the University of Calcutta.