Return to Being: A poem by Right Livelihood Laureate Nnimmo Bassey

Return to Being: A poem by Right Livelihood Laureate Nnimmo Bassey

This poem by laureate Nnimmo Bassey reminds our global community that human rights preparedness also means fostering resilience through poetry, art and other means of expression. Art eases suffering, empowers, and advocates in times of emergency.

Culture plays a significant role in human rights education. Cultural expressions such as music and poetry are powerful sources of strength in moments of crisis. They can be a ray of light in the darkness, helping to increase the resilience of people when their rights are violated. Right Livelihood Laureates such as the International Poetry Festival in Medellín, Colombia, and the astounding success story of the Venezuelan José Antonio Abreu with the musical project El Sistema have shown this over and over again.

It is in this spirit that we publish here a poem of the Nigerian poet, architect, environmental activist and Right Livelihood Laureate Nnimmo Bassey. For almost three decades now he has used the power of poetry to expose the brutal realities of oil production, environmental destruction, colonisation and other atrocities. His publications include titles such as Patriots & Cockroaches, We Thought It Was Oil But It Was Blood and I will Not Dance to Your Beat and are an invaluable testimony of the constant struggle against injustice and destruction.

Offering this poem as a contribution to this Curated section is meant to be a reminder that human rights preparedness also means fostering resilience through poetry, art and other means of expression, since it eases suffering, empowers, and advocates in times of emergency.

Return to Being
A poem

The battle rages
Who must gobble up the carbon budget,
Wrap Mother Earth in endless bales of smog?
Whose task is to pile the climate debt
And whose lot to be the carbon slave?
Colonize the biosphere
Obliterate the ethnosphere
Hopes mapped in colonial geographies of death
Scarified for sport, boobytrapped and floating on blood

Burst the funeral drums,
Tighten the tourniquets on hard hearts ensconced in hard hats
Drain the pipelines of caked memories and know
Fancy names for deadly scourges never made them friendly
Not Ebola. Not novelty in novel coronavirus
What children have I spawned, Mother Earth groans
The commons enclosed, entrapped for delicate, bloodied trophy hunters
Civilized kids hooked on zoos incarcerate relatives for a touch of the wild
All game snatching bread from astonished mouths of orphans
Now all masked, suited and 7 billion jabs against zoonotic embraces

Hear the footsteps from the receding market squares
Are you too far gone to hear?
Hear the rumblings of resistance to naked market forces
That roasted habitats and habitations
Lands, seas and skies grabbed yet dreams cannot be corralled ’cause
Daughters of the soil are ever alert, awake, hoisting the sky
And its watery dusts
Knowledge demonized by demons of market environmentalism and brazen extractivism
As the hunter’s bag becomes a weapon of mass destruction
Bulging pockets hack horns and tusks and an array of idiotic aphrodisiacs for limp brains
Slithering across the Savannah, stomping on our ancestral hearths
Shall we look, exiled, silent, sullen, sunk and annihilated as our trees metamorphose into carbon sinks?

The dream is gone, the cock has crowed,
The betrayer seeks a branch to ape a pendulum swing
And one or two shed a tear for the press
As the hawk glides softly on the winds of the dirge seeking a hapless prey
Funeral drums burst by pulsating biceps of pain
Flutes whisper a dirge long forgotten suddenly emerging from the depths of years of erased histories
As daughters and sons of the soil pick up pieces of sacred hills, rivers, forests
Mother Earth awakes, embraces her visible and invisible children
And finally humans return to being 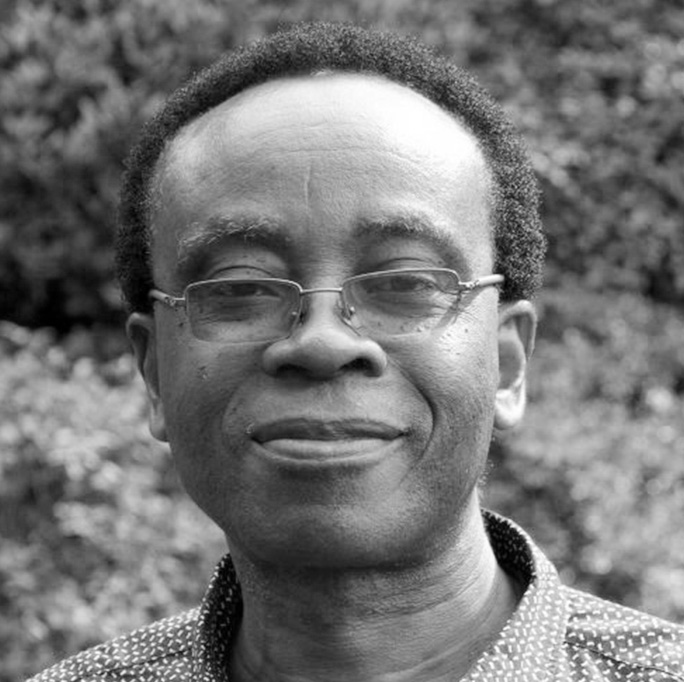 Nnimmo Bassey co-founded Environmental Rights Action (ERA), a Nigerian advocacy NGO and one of the world’s largest grassroots environmental networks. In 2010, he received the Right Livelihood Award for fighting against the horrors of oil production and for his inspired work to strengthen the environmental movement in Nigeria and globally.
Photo © Right Livelihood