The COVID-19 pandemic dramatically emphasised the fact that we are facing an existential crisis with multiple emergencies. This contribution highlights some of the core assumptions that have led to an unsustainable lifestyle based on inequality and the destruction of life.

The multiple crises and pandemics we face today (the COVID-19 pandemic, the hunger pandemic, the poverty pandemic, the climate emergency, the extinction emergency, the emergency of injustice, exclusion and inequality, dispossession and disposability of large numbers of humanity) are all rooted in a worldview based on the illusions of separation and superiority—which deny interconnectedness and oneness. One million species are threatened with extinction, with 200 going extinct every day. The present path humanity is on is clearly non-sustainable and is destroying life on Earth.

Non-sustainability and multiple emergencies, which are destroying the very infrastructure of life, are emerging as a threat of extinction to the survival of humanity. Humans too are a threatened species. False assumptions of separation and superiority are at the root of these multiple crises:

The above assumptions thus lead to the following conclusions: If nature is dead (ie, not living), Nature and the Earth can have no rights. There are therefore no ecological limits and no limits to extraction from nature. This is at the root of non-sustainability. Additionally, the anthropocentric assumption that humans are separate from nature and superior to other ‘rightless’ species is not just a violation of the rights of our fellow beings, but also a violation of our own humanity and human rights. We are members of one earth family, and our being human is predicated on our relations with Biodiversity and Living Seed, Land, Living Soil, Living Waters and Living Food. Human rights defined on the basis of separation and superiority makes ‘dominance’ and ‘exploitation’ appear natural to being human, when they are in fact constructs based on the illusion of separation and superiority. The denial of nature’s rights leads to her destruction and threatens the very conditions of human survival. In an ecologically interconnected world, the denial of the rights of nature would thus translate into the denial of human rights. From this perspective, violence against nature becomes the basis of violence against fellow human beings. Non-sustainability and injustice are therefore part of the same process.

The multiple emergencies mentioned above are not separate. They are interconnected with the same roots. This suggests that their solutions are also interconnected. The emergencies that threaten the very future of our species thus cannot be addressed by the same mind-set that created them in the first place. Yet, even though the crises are interconnected, each crisis is currently treated as unrelated to each other. The symptoms of these crises become the focus, rather than the need to address deeper root causes. As Einstein said we ‘cannot solve our problems with the same thinking we used when we created them’. We therefore need to change both our thinking and our ways of living so that all of humanity as well as other species can continue to live and thrive.

From the above perspective, the concept of ‘Earth Democracy’ has emerged. It is a worldview, a paradigm and a practice based on the recognition that everything is interconnected. The Earth is living and has rights—a view that places the duty on us to care for the Earth, and regenerate her soil, seeds and biodiversity, including her water and food systems. Our rights therefore flow like a spring from our duties. Earth Democracy further recognises that all human beings are equal and have the same rights, which are enshrined in the UN Declaration of Human Rights and other conventions that have evolved to especially protect the rights of women, indigenous people, peasants and children. While equal in rights, however, Earth Democracy emphasises that humanity is also diverse in race, religion, gender and culture. Diversity is not inequality.

Imposing concepts of ‘sameness’ and ‘uniformity’ on a biologically and culturally diverse world unleashes acts of violence against nature, her species as well as cultural diversity. Ultimately, Earth Democracy recognises that humans are part of the Earth and related to other beings. In other words, human rights are indivisible from the rights of the Earth and the rights of other species. Thinking about human rights preparedness in the face of crises such as the COVID-19 pandemic thus also entails repairing the Earth by respecting her as a rights holder. 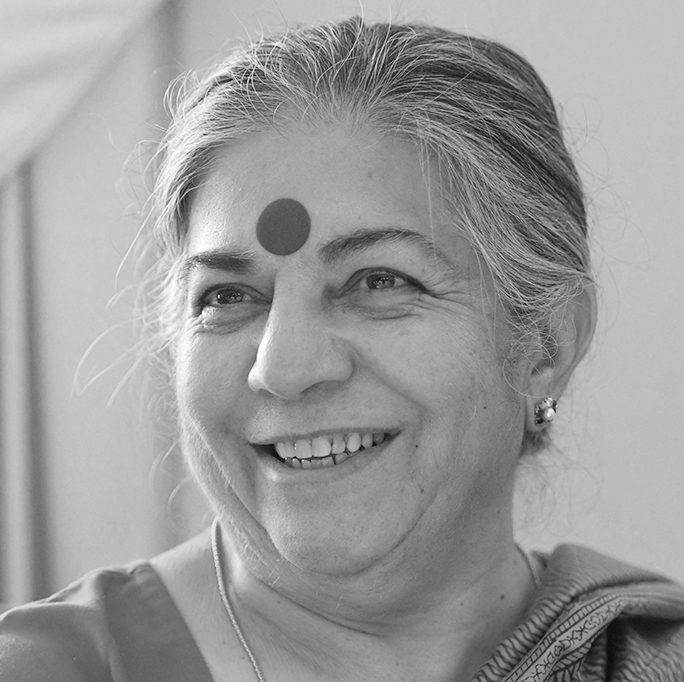 Dr Vandana Shiva is a world-renowned scholar and activist for economic, food and gender justice. She received the Right Livelihood Award for her dedication to placing women and ecology at the heart of modern development discourse. Together with the social movement Navdanya, Dr Shiva is currently collaborating with the Global Campus on a project about Earth Democracy and children’s rights.