Attention is focused on the COVID-19 pandemic, yet there are other ongoing crises including in the responses to people ‘on the move’ or migration.

Far between sundown’s finish an’ midnight’s broken toll
We ducked inside the doorway, thunder crashing
As majestic bells of bolts struck shadows in the sounds
Seeming to be the chimes of freedom flashing
Flashing for the warriors whose strength is not to fight
Flashing for the refugees on the unarmed road of flight
An’ for each an’ ev’ry underdog soldier in the night
An’ we gazed upon the chimes of freedom flashing

Over the initial months of the COVID-19 pandemic, as the Western Balkans slowly became the new pandemic hotspot of the European continent, many other aspects of human rights' concerns were marginalised. Yet we should not forget that simultaneously the Western Balkans—and especially Bosnia and Herzegovina—have for two years been a hotspot for deep concerns with respect to the response to 'people on the move', or migration. Human rights preparedness for emergencies obliges us to remain open and attentive to those who are 'on the move'—individuals and groups who tend to be left out, without a voice and any meaningful way to openly address their concerns and hardships.

According to the late May 2020 Operation Update Report - Bosnia and Herzegovina: Population Movement from the International Federation of Red Cross and Red Crescent Societies, 'since January 2018, the total number of arrivals to Bosnia and Herzegovina has been 57,686', while in May this year, it is estimated that there were 7,200 migrants, refugees and asylum seekers still in Bosnia waiting for the opportunity to reach the EU. 'The majority of people arriving', according to the Report, 'were heading through Tuzla and Sarajevo to Una-Sana Canton', the furthest Western part of Bosnia in their attempt to 'enter the EU through Croatia'. Gradually, in two years, the depressingly predictable behavioural pattern of anti-immigration sentiment has taken hold amongst the domestic population, which in turn has created fertile ground for various political framings of the immigration problem to meet the needs of daily politics of this heavily ethno-nationalised polity.

Problems are compounded because this divided country is institutionally incapacitated when it comes to dealing with this challenge of epic proportions. This institutional incapacity was to be alleviated by direct EU involvement, but a tension has emerged in practice. On the one hand, international organisations such as IOM, funded by the EU, have been managing the entire migration flow in Bosnia and Herzegovina; at the same time, however, EU funding has equipped the Croatian police and shored up border security—that is, it has funded the development of security capacities to prevent migrants from crossing the Croatian, that is the European, border. This self-contradictory approach of the EU to the migrant crisis begs many important questions that, I would say, concern the future of this entity.

First, one cannot avoid asking the obvious question: why the people on the move should, since they had already entered the EU in Greece, be stopped and prevented from moving on further into the EU? More specifically, the question is: why these people should be exposed to torture and intimidation by the Croatian police when re-entering the EU?

Viewed from a human rights perspective, this current migration problem and the paradoxical approach to it that combines humanitarian measures with toleration of pushbacks and violence, has its roots in a European shift in understanding its identity and its fundamental values, among which human rights and freedoms are the most prominent. Ironically, while at the same time celebrating the third decade of the fall of Berlin Wall, the EU seems to be encouraging the construction of new walls.

The Berlin Wall was constructed in order to prevent the free flow of people and ideas. As such, it was only the most visible portion of one larger, continental wall, of the Iron Curtain. Today, with these sad experiences with migration, it is tempting to conclude that the Iron Curtain has been upgraded in the form of a Schengen Wall.

As the first iron curtain served to protect the East from interference by people and ideas from the West, now it seems that the Schengen Wall serves to protect the West from the interferences of the East. Just as once it was on the western side of the Wall, today it is the Easterners who refer to universal values and freedoms.

In his touching book on the suffering of Hungarians on the move after the 1956 Uprising, The Bridge at Andau, the Pulitzer Prize-winning novelist James Michener writes: ‘There was a bridge at Andau, and if a Hungarian could reach that bridge, he was nearly free’ (p 173). What is preventing us from saying today: There is a bridge across Evros (at the Turkish-Greek border), and if a Syrian or Kurd could reach that bridge, they are nearly free.

Across the bridge at Andau fled more than 20,000 people who had known communism and who had rejected it. They had seen this new way of life at close hand, and they had learned in sorrow that it was merely ancient terrorism in horrible new dress, for it not only robbed and cheated men of the material things to which he was entitled; it deprived his mind of every challenge, every breath of new life and all hope. (p 174)

Why cannot we describe today’s migrants, refugees and asylum seekers in the way Michener described Hungarian migrants, refugees and asylum seekers? Because, maybe, these migrants of today are ‘illegal’? Well, strictly speaking, every crossing across the border beyond the official border-crossing is illegal—so there you go: every migrant from East Berlin, Hungary and the Eastern Block in general was ‘illegal’. And, of course, there is no more communism that people are fleeing from, but aren’t current despotic regimes—some of them the result of tragic Western interventions, whether military or business enterprise-based—eligible to be rejected? Don’t they too ‘rob and cheat men of things to which they were entitled, deprive their minds of every challenge, every breath of new life and all hope’? These sound like awfully good reasons to move.

Or, was the subtext of Michener’s description exclusively the fight against communism? In that case, viewed from the perspective of the Cold War, human rights and freedoms were merely the ideological weaponry, and today, out of that context, they are nothing but empty signifiers. In fact, today’s migration crisis, and also the recent anti-racist struggle of Black Lives Matter and other brave demonstrators who are eager to confront Europe with its colonial past, will reveal to us whether human rights and freedoms have any meaning beyond particular ideology, whether they still have radical emancipatory bite or not. 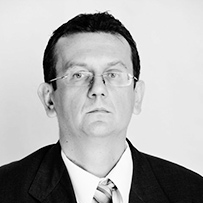 Asim Mujkić is co-director of the ERMA Programme and a professor of philosophy at the Faculty of Political Science, University of Sarajevo.