Advocate Pansy Tlakula, the Chairperson of the South African Independent Electoral Commission (IEC), who is also the African Commission’s Special Rapporteur on Freedom of Expression and Access to Information in Africa, recently addressed aspiring human rights students from across the African continent. This was during the official opening ceremony of the Centre for Human Rights’ Masters (LLM/MPhil) programme in Human Rights and Democratisation in Africa. The ceremony took place on Friday 8 February 2013 at the University of Pretoria. This prestigious programme is presented by 13 African universities under the stewardship of the Centre for Human Rights based at the Faculty of Law, University of Pretoria. The event was attended by donors, members of the diplomatic corps and senior management of the University of Pretoria. 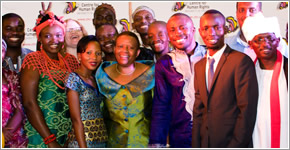 For the past thirteen years, the programme was open to candidates with a law degree but now also accepts students from other disciplines. In her speech, Advocate Tlakula commended the Centre for renewing its perspective on the multi-disciplinary nature of human rights by admitting non-lawyers to the programme, noting that ‘human rights are not for lawyers only’.

Advocate Tlakula encouraged the students to follow in the footsteps of their predecessors who have played an important role in supporting the African Commission on Human and Peoples’ Rights. Graduates of the programme also supported her in her work as Special Rapporteur by promoting the mandate of the Commission and assisting with the development of the Draft Model Law for African Union Member States on Access to Information in Africa. Advocate Tlakula appealed to the students to uphold academic excellence and to be at the forefront of human rights activism once they have completed the rigorous programme. She pointed out that Africa is faced with numerous old and new challenges such as youth unemployment, inequality and the violation of the rights of sexual minorities (LGBTI). She urged the students to confront these issues head-on.

Advocate Tlakula commended the students who have enrolled for this programme at a time at which the continent is witnessing serious violations of human rights. She concluded that ‘it is my hope that, upon completion of this programme, you will all join the frontline and fight for the rights of our people on the continent’.
The Class of 2013 is the fourteenth intake of the LLM/MPhil (Human Rights & Democratisation in Africa) programme and consists of 13 women and 15 men from 22 African countries. The students were admitted to the programme following an intensive selection process.
The number of alumni of the programme currently stands at 375 and are drawn from 42 countries. The alumni include academics, senior civil servants, diplomats and employees of national and international non-governmental organisations. The programme is funded by the European Union, the German Academic Exchange Services (DAAD), Open Society Initiative of Southern Africa and the Open Society Institute.