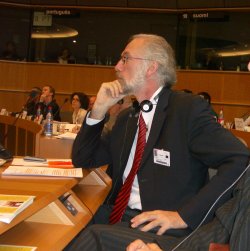 The President of EIUC is Prof. Dr. Horst Fischer since 2002 and he was the first Chairperson of the European Master's Programme in Human Rights and Democratisation from 1997 till 2001.

Prof. Dr Fischer covers also the following other key posts in the area of human rights, humanitarian law, and humanitarian action: Co-founder in 1993 and since 1999 President of the ECHO-funded NOHA-Association in Brussels, offering the NOHA Master which has been selected as an Erasmus Mundus programme in 2004; co-founder of the European University Network comprising of 60 universities 'HUMANET' focusing on issues of humanitarian activities; adviser for international affairs for the German Red Cross since 1986 and the Netherlands Red Cross since 2001; and President of the Berghof Peace Foundation Board in Berlin since 2001.