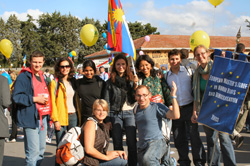 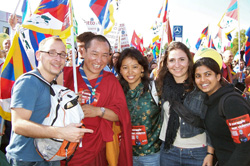 The slogan of the march this year was “Tutti i Diritti Umani per Tutti” (All Human Rights for All), and a central issue was, of course, the troublesome situation in Myanmar.

During the march everyone had indulgent time to think, discuss, dialogue, pray, listen to music, sing, drink, eat and do whatever they whish but always sharing peaceful involvement in the meaning of the day. The E.MA group marched compact for the bigger part of the journey, but sometimes the masterini spread along the procession involving in different conversations and walking at different pace.

The exciting long trip began at 4.10 a.m. at the Vaporetto Station on Lido where we met a group of the activist of the Venice’s Centre for Peace. We left the small island together and reached piazzale Roma where we boarded the bus. On the bus, all masterini thought that it would be possible to sleep, and in fact until around 7 am it was. But suddenly a crazy group of Venetian activists started to play the guitar and sing (shouting – in a proper Italian way...) just a row behind the E.MA group. After 5.5 hours of travel by bus to Perugia we set off on the march. Many groups, associations (religious, social and cultural), NGOs (like Amnesty and Legambiente) as well as political parties participated. 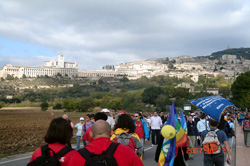 The total length of the march was 20 Km and we reached the church of Santa Maria degli Angeli at 3 pm. Afterwards we visited the “Porsiuncola” (inside the church), where San Francesco used to pray. Finally we left for Assisi.

The last part of the march was only a few kilometres but at the entry of the small medieval village of the Holy Francesco we found a crowded monumental staircase where only two of us had the courage to stay in line for almost one hour to enter. The problem was in fact the large group of people willing to reach the end of the march. Having quickly visited the tomb of San Francesco we ran back to Santa Maria degli Angeli where we had our meeting point to get on the bus and return to Venice.

We left the town at around 6 p.m. and happily arrived at piazzale Roma at 11:30 p.m. dead from the long trip, but really happy having being part of the peaceful expression of Human Right passion.
It was a great day!