E.MA Chairperson at the awarding ceremony of the 2006 UNESCO Prize for HR Education 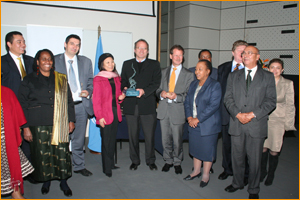 Prof. Manfred Nowak, Chairperson of the European Master's Programme in Human Rights and Democratisation (E.MA) offered a speech at the Prize-Giving Ceremony of the UNESCO Prize for Human Rights Education. The ceremony took place at the University of Pretoria on 25 May 2007. 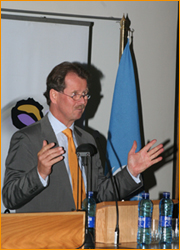 I am deeply honoured and personally very grateful to UNESCO for having awarded an honourable Mention of the UNESCO Prize for Human Rights Education to the European Master’s Programme in Human Rights and Democratisation (E.MA). E.MA is an intensive, inter-disciplinary and inter-European one year advanced Master’s programme to educate 90 professionals annually and to provide its graduates with practical experience. It is jointly carried out by 39 (soon 41) leading European universities and reflects the indivisible links between human rights, democracy, peace and development. This September, we will celebrate our 10th anniversary in one of the magnificent palazzos of Venice. The inauguration of the first course took place on 6 October 1997 with 10 European universities and some 50 students involved. One year later, 6 more universities (including my own university in Vienna) joined, which meant that each of the 15 EU member States was represented. Soon thereafter, we accepted a second university per member State (except Luxembourg) bringing the number of participating universities to 29. With the EU enlargement in 2004 and 2007, this number increased to 39, and this September we will accept 2 further universities from Romania and Bulgaria, the two most recently included EU member States.

EMA is the most important contribution of the EU to the UN Decade for Human Rights Education. It derives its strength and dynamics from two equally important pillars: a network of EU officials in the Commission, Council and Parliament who consider human rights and democracy as a major foundation of the internal and external policies of the Union, which also provides long-term funding to the programme. In this respect I wish to thank particularly the former head of the Human Rights Unit in the Commission, Daniela Napoli, for her untiring efforts to establish and finance the programme. But we are also supported by and cooperate closely with other international organizations (such as UNESCO, UNHCHR, OSCE, Council of Europe), development agencies (GTZ), the city of Venice and the region of Veneto. The second pillar on which our activities rest is a network of European academics, human rights institutes, who, together with experts from NGOs and IGOs, jointly organise and run the programme. Again, I wish to point out one individual, Antonio Papisca from the University of Padua, the spiritus rector of the whole exercise.

During the first semester, the students, at the charming old monastery of San Nicolò at the Lido di Vinezia, undergo a very intensive programme. They are bombarded by lectures and workshops of some 60 to 70 different and well-known human rights professors and practitioners. This semester ends with a practical introduction into human rights field work and a one-week trip to a post conflict peace building operation, during the first years in BiH, recently in Kosovo. You can imagine the difficulties of bringing a bunch of 90 students to a place like Sarajevo or Pristina, house them there with host families, engage them in discussions with UN, EU, OSCE, NATO and other peace keepers, and get them back healthy to Venice for their first semester exams. Students spend a more relaxed second semester at one of the participating universities, following some highly specialised seminars, carrying out individual research and write their Master’s theses on a broad range of innovative topics.

During the first years, the University of Padua under the dedicated leadership of Antonio Papisca awarded the Master’s Degree on behalf of the other universities, negotiated the funding and provided all the logistical and organisational support of the rapidly growing network. In 2002, the universities together founded the European-Inter-University Centre for Human Rights and Democratisation (EIUC), a legal entity under Italian law to take over from the University of Padua the institutional framework of running the EMA programme and an increasing number of other activities in the field of research, teaching, cinema and human rights etc. Its President is Horst Fischer from Bochum University, one of the other pioneers of our network. The real work in Venice is performed by a fairly small staff, consisting of George Ulrich from the Danish Institute of Human Rights in Copenhagen as EIUC Secretary General, Anja Mihr as European Programme Director, Elisabetta Noli as the head of all our activities and many others. It is always amazing for me how so few staff people can achieve such tremendous work. It is the special Venice spirit that holds us together and guarantees our success. By awarding a joint European degree for a couple of years, we also made an important contribution to the emerging European university space and harmonizing different university traditions according to the Bologna process.

Finally, we are proud that E.MA served as a model for similar regional Master programmes in Sarajevo for the Balkans region, in Malta for the Mediterranean region and, last but not least, in Pretoria for the African region.

I am particularly happy that our friends at the Pretoria University Centre for Human Rights, above all
Christof Heyns and Frans Viljoen, received this year’s UNESCO Prize for Human Rights Education for their outstanding and pioneering human rights work in South Africa and in the entire African region.

Again, I thank all of those who made this Prize Giving Ceremony possible, above all our good friend Vladmir Volodin, the Director of UNESCO’s Division of Human Rights, Human Security and Philosophy.

Former news posted on the EIUC website on 14 December 2006

The Honourable Mention, as announced by The Director-General of UNESCO, Koïchiro Matsuura on 10 December 2006, is given to E.MA, as organised by EIUC, in view of the “high level education provided to its 750 graduates” and its success in “satisfy[ing] the need for competent human rights practitioners through the application of a multidisciplinary educational concept”.  The UNESCO press release announcing the award also emphasizes that “the success of E.MA has served as an example for the creation of similar programmes elsewhere”.

The leading example of E.MA for the development of Regional Master’s Programmes in Human Rights and Democratization is also recognised by Prof. Christof Heyns, the Director of the Human Rights Centre in Pretoria, which has been awarded with the 2006 UNESCO Prize for Human Rights Education. In response to a letter of congratulation sent to him by the EIUC President, Prof. Horst Fischer, Prof. Heyns says: “the exceptional example you (E.MA/EIUC) set was our main inspiration in starting our programme - I can still recall very well how I read a brochure on your programme on the plane coming back to South Africa from a meeting with Professor Flauss (former E.MA Director), and realising this is exactly what we need in Africa, as well as our subsequent meetings in Venice. We would like to thank all of you for that, and like to say that we appreciate our link with you very much, and hope to develop our collaboration in pursuing our joint enterprise further, indeed as friends and partners”.

The EIUC President, together with the E.MA Chairperson, Prof. Manfred Nowak, express their gratitude to UNESCO on behalf of the member universities for the honourable mention received which witnesses, with the 10th anniversary from the institution of E.MA approaching, the uniqueness of the E.MA programme as laboratory for academic integration and as successful investment of the European Union in specialised human rights education and training.