Events to celebrate the anniversary of the UDHR

Three days of human rights related events is the public and non-for profit cultural proposal organised by the E.MA students to celebrate the anniversary of the Universal Declaration of Human Rights (UDHR) in Venice with the support of the European Inter-University Centre for Human Rights and Democratisation (EIUC).

The Building Bridges Human Rights Film Festival is an annual event specially dedicated to human rights issues in celebration of Human Rights Day. Each year, the festival brings together Italian and international directors, artists, academics and audiences under various themes in the context of human rights.

This year, the theme of the festival is borders. There were screenings of films on various human rights issues related to borders (i.e. migration, human trafficking), discussions with directors, a cocktail hour and food! And most important of all, these were all provided for FREE!

*The Building Bridges Human Rights Film Festival was organised with the support of the European Inter-University Centre for Human Rights and Democratisation (EIUC), the Assessorato alle Politiche Giovanili e Pace of the Municipality of Venice, and in collaboration with Rete Tuttiidirittiumanipertutti and Ca’ Foscari Cinema.

The Centro Pace of the Municipality of Venice also organised specific events on Monday 10 December as indicated in the poster below: 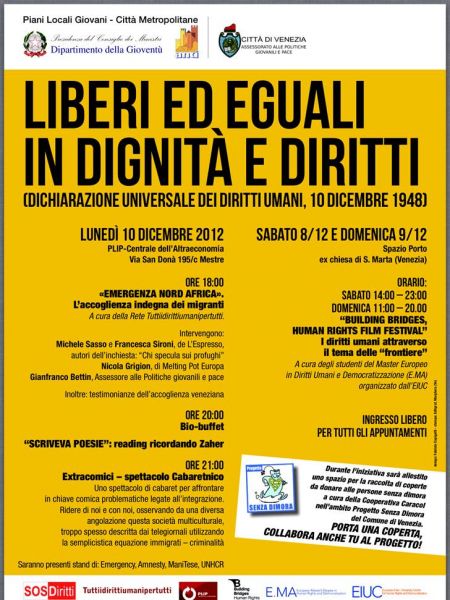