Exchange of professors: Lat.Ma visits the MHRD Programme in Kathmandu 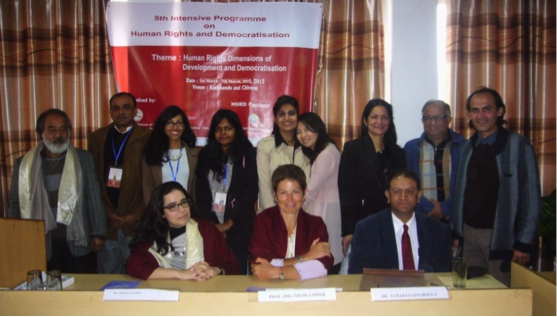 Between 27 February and 1 March 2015 the Kathmandu School of Law (KLS) – a partner university of the Asia-Pacific Regional Program on Human Rights and Democratisation (MHRD) based at the University of Sydney— received the visit of Veronica Gomez, Co-director of CIEP-UNSAM and the Latin American Programme on Human Rights and Democratisation (Lat.Ma), as part of the Global Campus Exchange of Lecturers and Researchers. The visit took place in the context of an Intensive Course on Human Rights and Development held in Nepal, with the participation of Prof. in-charge Dr. Yubaraj Sangroula, former Attorney General of Nepal; Prof. Kapil Shrestha; Prof. Madhav Prasad Acharya, President of KSL; Prof. Ajaya Dixit; Prof. Geeta Pathak Sangroula, Executive Director of KSL; and Prof. Nicola Piper, Director of the Asia-Pacific Programme, among other lecturers.

As part of the Intensive Course, Ms. Gomez delivered a lecture on the Inter-American System of Human Rights for the students of the Master´s in Human Rights and Democratisation and the KSL undergraduates. The lecture referred to the mechanisms of human rights protection developed by the Inter-American Commission and Court and in particular to their recommendations and decisions relating to transitional justice situations in Latin America, which are relevant to the current context in Nepal.

During her stay in Kathmandu, Ms. Gomez also visited the Nepal Bar Association and held a meeting with its authorities and legal advisors. The Association was recently involved in the filing of a brief before the Supreme Court in support of an appeal filed last year by 234 victims of the armed conflict. In a ruling delivered on 26 February 2015, the Supreme Court annulled the amnesty provision of the Transitional Justice Act and curtailed the discretionary powers of the Truth and Reconciliation Commission and the Commission of Investigation on Enforced Disappeared Persons to grant amnesty in cases involving the perpetration of human rights violators. During the meeting with the Bar Association Ms. Gomez discussed strategies developed in Latin America in transitional justice situations in light of recommendations and decisions issued by the Inter-American Commission and Court as well as decisions by the Argentine Supreme Court.