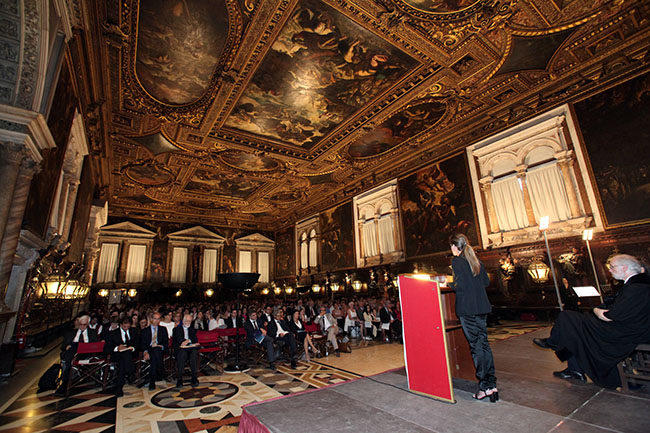 Sunday 21 September 2014, the Ceremony for the Awarding of Diplomas of the European Master’s Degree in Human Rights and Democratisation (E.MA) 2013/2014, and the inauguration of the a.y. 2014/2015, took place in the spectacular and artistic frame of the Scuola Grande di San Rocco in Venice.

More than 450 international guests were gathered in the Ceremony hall of the Scuola Grande that hosts 65 of the most important masterpieces of Jacopo Tintoretto, with the notes of “Ruggiero” for strings and harpsichord by Tarquino Merula - performed by Interpreti Veneziani - providing the fitting musical atmosphere to the solemn entrance procession of the academic authorities in their caps and gowns.

Along with the Venice School, the Venice Academy and the Global Campus of Master’s Programmes in Human Rights and Democratisation, E.MA is one of the leading academic programmes carried out by the European Inter-University Centre (EIUC). EIUC advances innovative programmes and projects that contribute to policy formation in Europe and assistance to neighbouring countries, democracy and good governance, promotion of the rule of law and overseas development cooperation.

The Ceremony awarded the Joint Diploma of European Masters in Human Rights and Democratisation to the 89 laureates of the 2013/2014 course and welcomed the 86 students of a.y. 2014/2015 coming from all over Europe and beyond. During the Ceremony the EIUC President, Prof. Horst Fischer, welcomed the students recalling the future challenges they will face as human rights professionals.

He signed then a Memorandum of Understanding with the Director of the UN System Staff College, Mr. Jafar Javan, in view of developing common activities.

A further highlight event of the Ceremony 2014 has been the accession of the University of Zagreb to the E.MA/EIUC network; Prof. Fischer and the newly appointed E.MA Director, Prof. Josip Kregar, formalized this accession in front of the new E.MA students who will benefit from the widening of their educational and research possibilities for second semester courses.

The following officials from the Italian government and the European Union addressed the audience:

v Mrs Stefania DALL’OGLIO, Secretary General, Inter-Ministerial Committee for Human Rights – Italian Ministry of Foreign Affairs who explained the role of CIDU underlying the most important deadline that CIDU shall soon meet, next 27th of October: the examination of Italy by the United Nations Human Rights Council – in the framework of the Universal Periodic Review;

v Patricia BOCCHI, European External Action Service (EEAS), Human Rights and Multilateral Diplomacy who focused on the key actions performed by the Service in the latest period: the establishment of Human Rights Country Strategies, the appointment of HR focal points in all EU delegations, the HR dialogues with more than 40 partner countries and the new HR Guidelines.

The enthusiastic address by the student Representatives, Adan Aguilar Esquivel and Saionara Santana Reis, constituted an extra highlight for the event, directly followed by the awarding of the Global Campus Prize for the Photo Competition 2014 “Migrants and Community Action”, introduced by the GC Vice President, Veronica Gomez. The winner, Adebayo Okeowo, from the African Masters in Human Rights and Democratisation, was awarded for the picture “The Glue of Africa” for his excellent composition which combines inventive with optimism.

Last but not least, the President of the E.MAlumni Association, Lydia Malmedie, presented the E.MActivism Prize 2014, which has been awarded to the E.MA 2013/2014 graduates performing in Venice the play “Vagina Monologues“ and initiating the advocacy campaign “Migrants Matter”.

The Ode an die Freude by Ludwig van Beethoven closed the Ceremony after the Official opening of the E.MA academic year 2014/2015.

You can download the full programme of the Awarding Ceremony here.