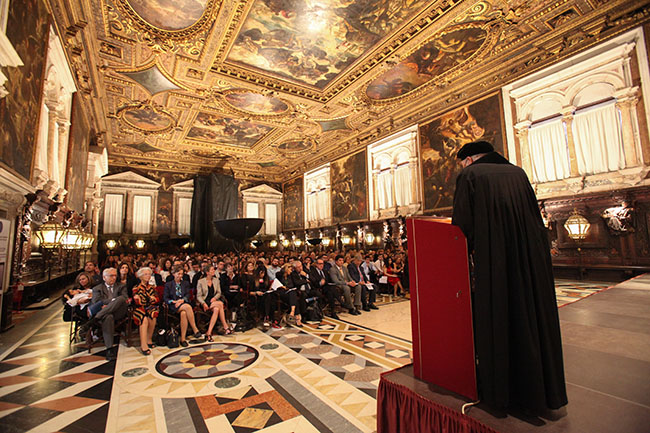 Sunday 27 September 2015, the Ceremony for the Awarding of Diplomas of the European Master’s Degree in Human Rights and Democratisation (E.MA) 2014/2015, and the inauguration of the a.y. 2015/2016, took place in the spectacular and artistic frame of the Scuola Grande di San Rocco in Venice.

More than 450 international guests were gathered in the Ceremony hall of the Scuola Grande that hosts 65 of the most important masterpieces of Jacopo Tintoretto, with the notes of “La Verità in Cimento” for strings and harpsichord by Antonio Vivaldi - performed by Interpreti Veneziani - providing the fitting musical atmosphere to the solemn entrance procession of the academic authorities in their caps and gowns.

Along with the Venice School, the Venice Academy and the Global Campus of Master’s Programmes in Human Rights and Democratisation, E.MA is one of the leading academic programmes carried out by the European Inter-University Centre (EIUC). EIUC advances innovative programmes and projects that contribute to policy formation in Europe and assistance to neighbouring countries, democracy and good governance, promotion of the rule of law and overseas development cooperation.

The Ceremony awarded the Joint Diploma of European Masters in Human Rights and Democratisation to the 85 laureates of the 2014/2015 course and welcomed the 92 students of a.y. 2015/2016 coming from all over Europe and beyond. During the Ceremony the EIUC President, Prof. Horst Fischer, welcomed the students recalling the future challenges they will face as human rights professionals.

The following representatives of Italian and European institutions and non-governmental organisation addressed the audience:

Mr Pier Paolo BARETTA, Undersecretary of the Ministry of Economy and Finance intervened in representation of the Italian government to highlight the institutional attention to human rights issues and the need to nurture a culture of dialogue, tolerance, human dignity and respect: a goal that EIUC accomplishes through its international educational activities in line with the multicultural tradition of the city of Venice. 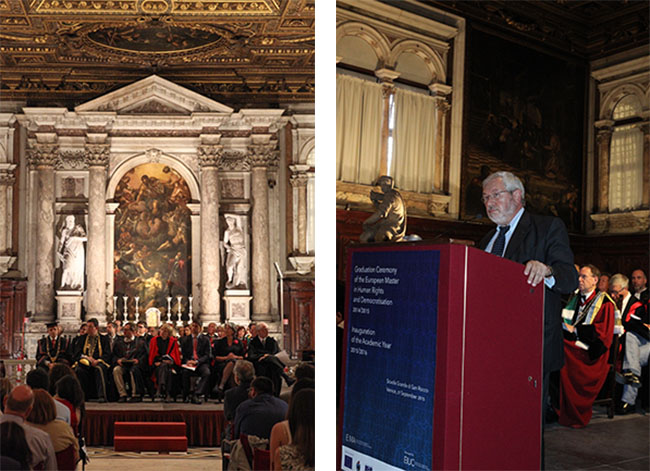 Mr Pierfrancesco DE CERCHIO, Counsellor, Inter-ministerial Committee for Human Rights – Italian Ministry of Foreign Affairs and International Cooperation who explained the role of CIDU in drawing the attention at political level on several crucial issues, in the organization awareness-raising events and in the field of education and training to promote democracy and the rule of law at international level.

Prof. Stelios PERRAKIS, Ambassador, permanent Representative of Greece to the Council of Europe explained the importance of the European system for protection of human rights and its mechanisms, focusing on the Council of Europe’s initiatives and commitments for the upcoming years.

Niccolò FIGA’-TALAMANCA, Secretary General, No Peace Without Justice, focused on the challenges faced by the new generation of human rights defenders in order to raise awareness and sensitiveness within the public opinion about the continuous massive human rights violations perpetrated worldwide on a daily basis.

The enthusiastic addresses by the student Representatives, Samuel Underwood and Claire Nevin, perfectly led to the awarding of diplomas ceremony, directly followed by the awarding of the Global Campus Prize for the Photo Contest - PRISMA 2015 on the theme of “Freedom”, introduced by the GC Vice President, Veronica Gomez. The winner, Max Bastard, was awarded for the picture “A Peasants Struggle” which can still be seen along with some of the other contestants’ works at the seat of EIUC where the photo exhibition is open to the public.

Last but not least, the President of the E.MAlumni Association, Lydia Malmedie, presented the E.MActivism Prize 2015, which has been awarded to Virginie Hoarau for the many activities and campaign initiatives carried out by 2014/2015 E.MA students.

The Ode an die Freude by Ludwig van Beethoven closed the Ceremony after the Official opening of the E.MA academic year 2015/2016.

You can download the full programme of the Awarding Ceremony here.

You can view a photo gallery here.