On Friday 15 July 2011 EIUC handed the EIUC Medal of Honour to Ms Mary Robinson as a tribute to her long lasting efforts in the promotion and protection of human rights.

The awarding ceremony took place in the suggestive Sala del Piovego of Palazzo Ducale at the presence of the Mayor of Venice, Prof. Giorgio Orsoni, and EIUC President, Prof. Horst Fischer. 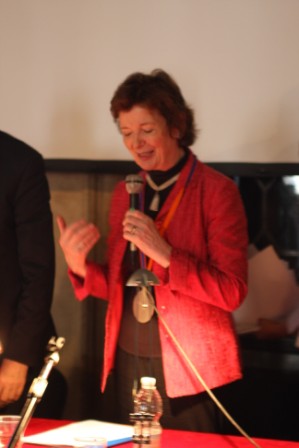 A laudatio in her honour was given by Ms Véronique Arnault, Director for Human Rights and Democracy, European External Action Service (EEAS). Ms Robinson gave a lectio magistralis on the Implications of the Arab Spring for Human Rights in the 21st Century. The event closed with a buffet in the Loggiato of Palazzo Ducale.

Mary Robinson is President of the Mary Robinson Foundation – Climate Justice . She served as President of Ireland from 1990-1997 and UN High Commissioner for Human Rights from 1997-2002. As High Commissioner, Ms Robinson gave priority to implementing the Secretary-General’s reform proposal to integrate human rights into all the activities of the United Nations and she strengthened human rights monitoring in conflict areas.

She is a member of the Elders and the Club of Madrid and the recipient of numerous honours and awards including the Presidential Medal of Freedom from the President of the United States Barack Obama.

She was former President of the International Commission of Jurists, former chair of the Council of Women World Leaders, and President and founder of Realizing Rights: The Ethical Globalization Initiative from 2002-2010.

Mary Robinson serves as Honorary President of EIUC and Oxfam International. She is also Chair of the Board of the Institute of Human Rights and Business in addition to being a board member of several organisations including the Mo Ibrahim Foundation and the European Climate Foundation. Ms Robinson is the Chancellor of the University of Dublin since 1998.