After gathering for the last two years in Brussels, the E.MAlumni Association returned home to the Monastery of San Nicolò on Lido for a trio of activities: Career Day, the General Assembly and the launch of the Global Campus Alumni Associations’ Network.

What we could call the “E.MAlumni Triathlon”, started on 25 January 2013 with the E.MA Career Day with presentations from Sara Melkko (class 2003/2004), Mark McGinty (class 2004/2005), Sophie Kammerer (class 2005/2006), and Daniele Grivel (class 2011/2012). They reported on their respective career paths and shared useful insight and advice with current masterini and, as with previous Career Days, the CV clinic proved highly popular and valuable. Many thanks to Sara for working so late to help perfect so many CVs! View pictures here

On Saturday, the Aula Magna again saw the familiar faces of past years’ graduates and current students who attended the 3rd E.MAlumni Association General Assembly. The E.MAlumni Board 2.0 members reported on several ongoing activities (such as the Career Service, Mentoring Programme, E.MAlumniIntheField and E.MAg) and new upcoming initiatives such as E.MArrivals and E.MAdays which aim to enhance networking and cooperation between alumni, masterini and E.MA Directors.

Thanks to the support provided by EIUC, the event was also attended by a virtual community of 180 people who followed the discussions via livestream on the E.MAlumni Association website.

After the official launch of the Global Campus in early December 2012 in Venice, the E.MAlumni Board immediately initiated contact with its counterparts in the other Regional Masters Programmes for the development of a joint alumni association as indicated in Art. 2 of the Memorandum of Understanding. The 3rd E.MAlumni General Assembly seized the opportunity to invite these very special guests, the representatives of the Global Campus Alumni Associations: David Medina (Latin America), Sos Avetyian (Caucasus) and Laura McManus (Asia-Pacific region). They introduced their respective Masters Programmes to an attentive audience, offering insight into the significance of human rights education in their regions.

Saturday afternoon gave the floor to a very interesting and passionate Round Table with the provocative title “Intercultural Human Rights or Playing God in the South?”. The panellists, made up of Global Campus Alumni representatives and two E.MAlumnae, Emilia Venetsanou (class 2000/2001) and Iune Baravalle (class 2010/2011), raised challenging points and reported on some of the difficulties they encountered in the field as human rights professionals.

Another highlight of the day was the launch of the Global Campus Alumni Associations’ Network which brings together alumni from six Regional Masters on five continents. An overview of the main features, goals and anticipated activities of the Global Campus was presented by its Project Manager, Marco Baldan. 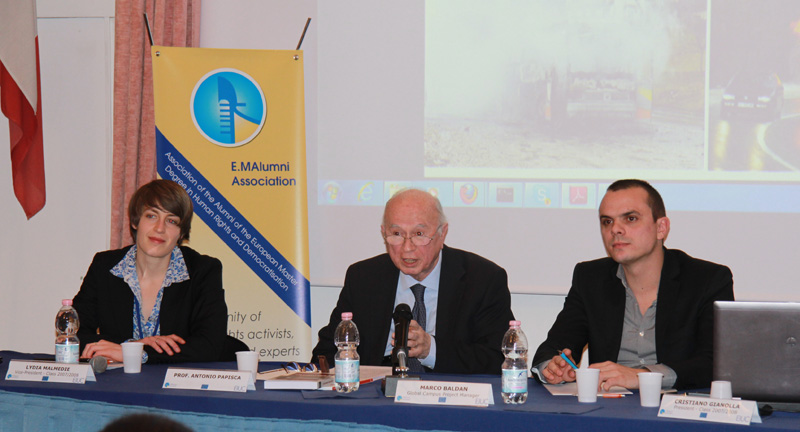 This intense journey in the life of the E.MAlumni was underscored by the inspiring speech on “Human Rights in the Global Perspective - Intercultural Achievement in the Regional Context” given by Professor Antonio Papisca of the University of Padua (Italy). As one of the founding fathers of the E.MA Programme, Professor Papisca offered much food for thought regarding current challenges for human rights as well as some fond and entertaining memories of the early years of the E.MA programme. (Click here to read the full article by Professor Papisca). 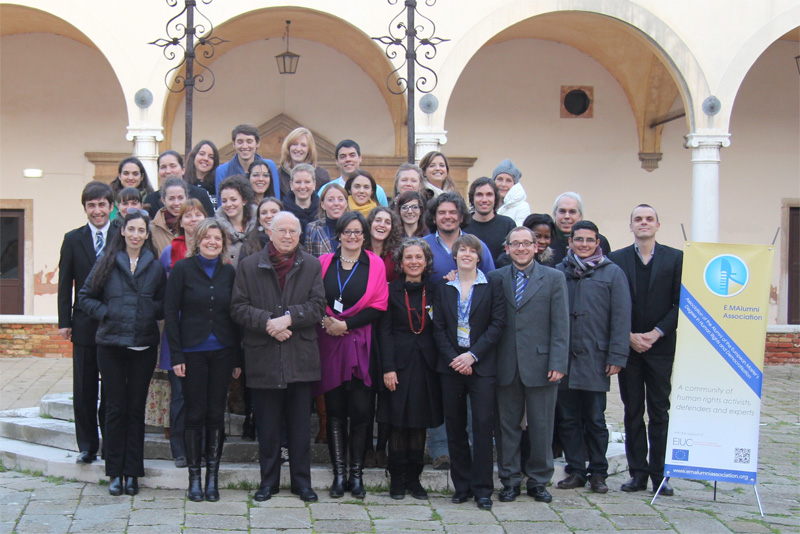 Participants with E.MA Programme Director, Dr. Angela Melchiorre,
and Professors Antonio Papisca and Marco Mascia of the University of Padua

On Sunday 27 January the EIUC Secretary General, Prof. Florence Benoit-Rohmer, and Global Campus Project Manager, Marco Baldan, joined the first working meeting between the E.MAlumni Board and the Global Campus Alumni Associations representatives including Niaz Ahmed from the Asia-Pacific region who intervened via Skype. A plan of action was drafted for the establishment of short, medium and long-term joint activities.

The success of this “E.MAlumni Triathlon” is due to the combined efforts, dedication and common vision of all participants, facilitators and EIUC for its continuous support to the Association. It makes for an incredible team! View video

The E.MA spirit is as strong as in its first years and it is already spreading to the Global Campus alumni!