LAT.MA students' impressions on the exchange and integration sessions

LAT.MA STUDENTS’ IMPRESSIONS ON THE EXCHANGE AND INTEGRATION SESSIONS

Between 19-21 January 2016, Prof. Dr. Gerd Oberleitner from the Institute of International Law and International Relations of the University of Graz, Austria, visited the Master’s in Human Rights and Democratisation in Latin America and the Caribbean (Lat.Ma), at the University of San Martin in Buenos Aires, Argentina, in the framework of the Global Campus of Human Rights’ Exchange of Lecturers and Researchers.  During his visit, Prof. Dr. Oberleitner offered two lectures on the European System for Human Rights and a joint integrated session on regional protection of human rights in Europe and the Americas, with emphasis on standards in the area of terrorism and human rights, the latter together with Lat.Ma Co-Director and Global Campus Chair, Veronica Gomez.

Aside from the usual course evaluation, three Lat.Ma students were asked to share some impressions on the experience of the exchange and the integration.

The course on European Human Rights System has been one of the most interesting we have had so far in the Programme, due to the topics and the methodology used by Prof. Oberleitner.  Our Master’s Programme at the University of San Martin in Argentina emphasizes the study of human rights issues in Latin America and the Caribbean. Thus, the importance of completing our training by learning and understanding the experiences in other regions.  The lecturer seemed to be a knowledgeable expert in the field with extensive experience in public international law and the international law of human rights and his classes were offered in an interactive manner.  This allowed the students to take full advantage Prof. Oberleitner’s knowledge and experience.

First, we discussed the institutional structure of the European System and the international treaties that it is based upon. Secondly, we analysed the procedure to bring individual complaints against States which have ratified the European Convention of Human Rights.  An understanding of the European System’s institutions and their evolution over time was very important for a comparative analysis with the Inter-American Human Rights System, especially regarding the elimination of the European Commission of Human Rights.  Over the past five years, the Inter-American System –and in particular the Inter-American Commission on Human Rights (IACHR)— has been the object of attacks by some States of our region.  Many detractors have proposed the elimination of the IACHR arguing that it has a political agenda against some countries.  Looking at the experience in the European System helped us understand this problem.  Many of the Master students will return to their work in civil society organisations and state institutions after graduation.  The insights provided by Professor Oberleitner will become useful tools to deal with this debate.

The integrated teaching on terrorism and human rights with Professors Oberleitner and Gomez gave us the opportunity to explore standards of both regional protection systems, their differences and similarities.  All students were very glad with Professor Oberleitner’s visit to Buenos Aires.  We hope that the Global Campus will continue exchanging professors between programmes and allow us to improve our knowledge in preparation for returning back our jobs as human rights defenders.

We had a profitable and attractive academic journey at the Masters’ thanks to the visit of Prof. Gerd Oberleitner (University of Graz - Austria) who lectured on the subject "European System of Human Rights."  He explained the historical context that led to the creation of the Council of Europe, with the Second World War leaving the continent in ruins and in need of rethinking the future; and the adoption of the European Convention and creation of the Court, to ensure the respect for fundamental rights and the non-repetition of atrocities.  He explained how since its creation the European Court has studied thousands of cases relating to the application of the Convention and its Protocols, and the substantial reforms brought by Protocol No. 11, which suppressed the European Commission of Human Rights and transformed the Court. The European System has been at the forefront of human rights interpretation in many key issues and has been an example for other regional systems of human rights protection.

We also had an interactive analysis of the European and Inter-American Systems offered in a very didactic manner by Professors Oberleitner and Gomez.  The lecturers discussed the features and context of both regions, their respective dynamics and the particular challenges faced by each.  Despite the different realities and priorities in each region, they share their main objective of ensuring the respect for human rights and developing tools to attaining that purpose. The strengthening of democracy in the member states is part of the values in both systems and it is closely in line with the decisions and recommendations of the organs of protection.

The visit of Prof. Oberleitner was valuable to me from three perspectives.

In the first place, understanding the political and ideological foundations of the European System in comparison with the Inter-American System, was very revealing.  Learning that democracy is one of the pillars of the both systems, and yet that their priority values are not always the same, helped me comprehend some of the differences in the human rights situation in each region and in the proceedings that each system employs to deal with complaints and issues.  We discussed diversity as a value and how it was interpreted in both Systems. We also discussed how both systems were originally based on the protection of civil and political rights, thus legitimizing a particular historical perspective on the protection of human rights, and which were the tools developed by both systems in the area of economic, social and cultural rights.  This was important for my own understanding of the role of the State in human rights protection in general, at the regional and universal levels.

In the second place, it was clear that the European System is much broader and complex than the Inter-American System, and operates mainly through an efficient Court. However, I believe that this model could not be exported to other regions of the world where it would find many obstacles impeding its effectiveness.  In our own regional system, for example, the role of the Inter-American Commission is essential and it owes much of its impact to this organ’s work. In this sense, it was important to learn from the visiting Professor about the strengths but also the weaknesses of the European System, a system that certainly sets precedents at the international level.

In the third place, the session with the participation of the two experts in the field of European and Inter-American protection of human rights was fundamental for my learning process.   Listening to their dialogue helped me broaden the understanding of human rights through comparison as a method of teaching, and link to the subject important analogies and founding differences.  For future integrated sessions I would recommend further work with cases from each system, and more time for student participation. 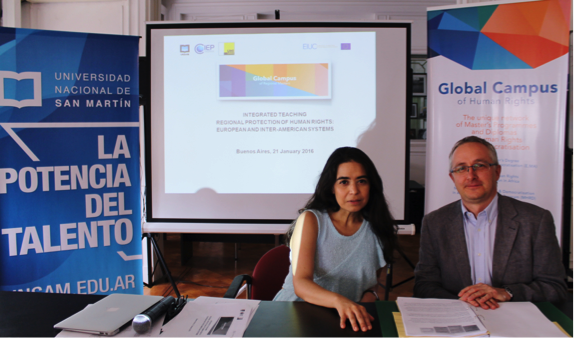 * Harold Burbano is an Ecuadorian lawyer with experience in litigation before in the Inter-American System.

*** Sandra Dorado is a Colombian social communicator/journalist with experience assisting victims of the armed conflict in rural areas of Colombia.