It is with great pleasure that EIUC President and the entire EIUC community congratulate Ms Mary Robinson for her recent appointment by the United Nations Secretary General Ban Ki-moon as his Special Envoy for the Great Lakes region of Africa.

Through her several previous political and diplomatic appointments, including as former Irish President (1990-1997) and United Nations High Commissioner for Human Rights (1997-2002), Ms Robinson gained an international recognition for her commitment to and advocacy for human rights, democracy, global justice and peace.

Ms Robinson will continue her mandate as President of the Mary Robinson Foundation – Climate Justice, which advocates for victims of climate change who are usually forgotten: the poor, the disempowered and the marginalized across the world. 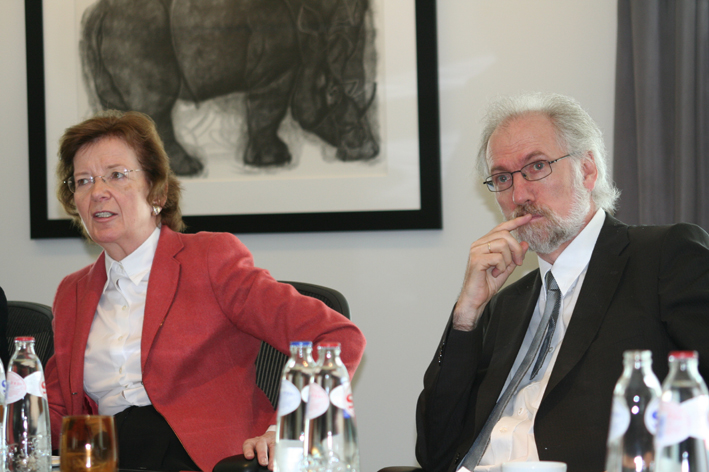 Our ties with Mary Robinson go back to 1999 with the signature of a Memorandum of Understanding between the UN Office of the High Commissioner for Human Rights and the European Master’s Degree in Human Rights and Democratisation (E.MA).

Ms Robinson serves as EIUC Honorary President since 2006 and in July 2011 she was awarded with the EIUC Medal of Honour by EIUC President, Prof. Horst Fischer, as a tribute to her long lasting efforts in the promotion and protection of human rights.

Ms Robinson, EIUC Honorary President,
and Prof. Horst Fischer, EIUC President,
during a meeting with the EIUC Board in 2008