On June 11, 2014, Prof. Dr. Hans J. Giessmann, Member of the E.MA Board of Director, representing University of Hamburg, participated in a panel discussion on the topic “Human Rights – Freedom – Security” at the world-famous Alfred Nobel Institute in Oslo, Norway.

During his presentation he focussed on the opportunities of dialogue facilitation and external support in transformative peace processes. In the presence of the Norwegian King, Harald V., the German Federal President, Dr. h.c. Joachim Gauck, and members of the Nobel Institute’s Committee, he emphasized the need to protect and restore human rights and to build global alliances against the growing brutality against civilians in non-international armed conflicts.

Professor Giessmann had been invited by the German Federal President Gauck to accompany his delegation on an official state visit to Norway. 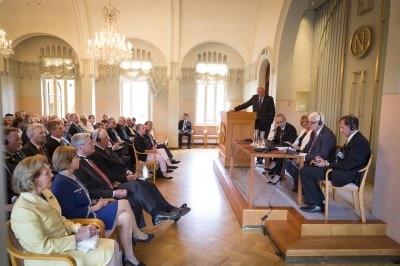 Professor Giessmann (2nd from right) had been invited by the German Federal President Gauck to accompany his delegation on an official state visit to Norway.