Following up the Memorandum of Understanding between the City of Venice and the European Inter-University Centre for Human Rights and Democratisation (EIUC) signed on 15 July 2011, Prof. Fabrizio Marrella has been appointed Dean of the Human Rights Village (HRV).

With this ongoing project, EIUC aims at becoming the Centre of Excellence in the world for an holistic model of teaching, training, research, advocacy, counselling, advice in human rights, democratisation, peace, justice, democracy, sustainable development as well as other interrelated issues. 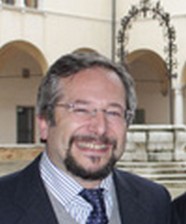 He is general editor of the EIUC series on Human Rights and Democratisation by Cambridge University Press and has participated in international symposia or given invited lectures at a range of Universities and professional organizations in the five continents. As a professor of International Law at the University "Cà Foscari" of Venice (Italy), he has written extensively on, taught and practiced International Law, International Investment Law and International & European Business Law.

Prof. Marrella speaks fluently four languages (English, French, Spanish and Italian) and holds the highest doctorates with top grades from the University of Paris I Panthéon Sorbonne and the University of Bologna, as well as the Diploma from The Hague Academy of International Law.