Visit to EIUC of Moscow delegation in April 2010

On 12 April 2010 three delegates of the Russian Consortium Project Management Team, Mrs. Shivleta Tagirova from the PFUR (People Friendship University of Russia), Mrs. Daria Trenina from the MGIMO (Moscow State Institute of International Relations) and Natalia Shatina from the RGGU (Russian State University of the Humanities) together with Mr. Rachid Alouach from the UN-OHCHR visited the EIUC premises in view of designing the first steps to implement the agreement between EIUC and the Consortium in the coming months.

Profs. Florence Benoit-Rohmer and Fabrizio Marrella welcomed the Russian colleagues and discussed with them many opportunities for teachers and students mobility.  As a first step Prof. Fabrizio Marrella, E.MA Programme Director, had gone to Moscow in April 2010 and delivered lectures to the 15 students of the Russian Federation Human Rights Master launched by the Consortium in September 2009 under the coordination and with the support of the OHCHR Russia.

Prof. Marrella also participated as a key speaker in the International Conference of the People Friendship University of Russia and conducted consultations with teachers of the Russian Human Rights Master regarding the Curriculum of the Programme.

Since the Cooperation Agreement provides for the participation, on a regular basis, of professors from EIUC, four more E.MA professors are expected to teach in Moscow in this semester. 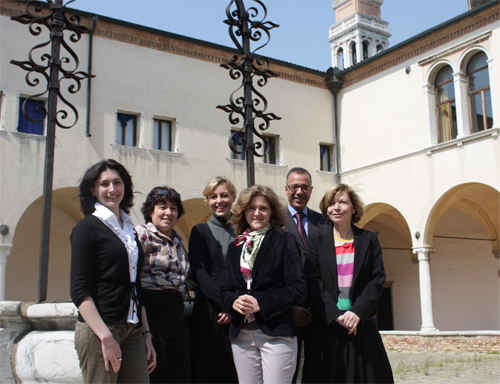